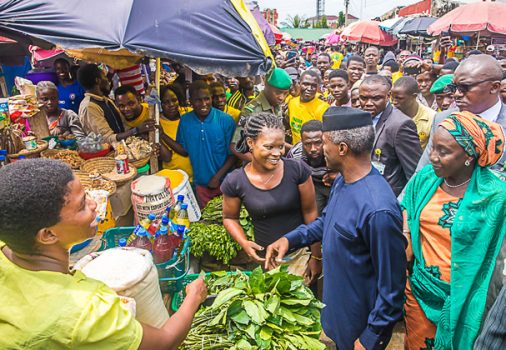 Speaking on Arise News on Tuesday, a spokesperson of the PDP’s Presidential Campaign Organization, Mr. Akin Osuntokun described such acts as signs of underemployment which could not have taken place under a serious administration.

Osuntokun described President Muhammadu Buhari’s 2019 New Year speech as pathetically empty and an indication that he has finally given up following his irredeemable rejection by Nigerians.

His words: “Nigerians are not that gullible. Sharing ₦10,000 in few weeks to the elections will not help this government, unless you are implying that Nigerians are gullible.

“A country and electorate that vote on that basis have a problem. You campaign on what you have done.

“That is an indication of a Vice President who is underemployed. The Vice President of a serious country of 180 million people going around markets and motor parks hawking ₦10,000. Is that governance? That is a joke.

“Have you ever heard it in any serious country where the Vice President goes from door-to-door to campaign? The vice president of Nigeria’s job is 24 hours, the complexity of Nigeria’s governance alone.

“If that is the priority of a vice president, knocking from door-to-door, then that is an explanation of why the government has failed,” he added.