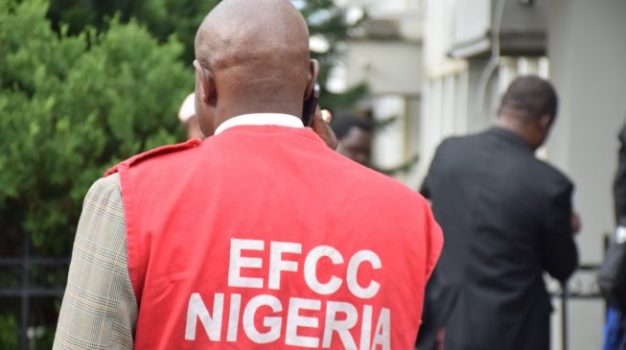 The Economic and Financial Crimes Commission (EFCC) has paraded a newly-elected lawmaker of the Kwara State House of Assembly, Hon. Abdulgafar Ayinla over alleged property fraud to the tune of ₦26 million.

Ayinla, who was accused of engaging in property scam, forgery and obtaining money under false pretence was arrested by operatives of the Ilorin Zonal Office of the anti-graft agency.

According to the EFCC, the suspect who is expected to be sworn in next month has confessed to the commission of the crime, disclosing that he used the money to finance his political campaigns.

Ayinla’s arrest followed a petition filed by an unnamed female, who resides in the United States of America that the lawmaker-elect, who is a legal practitioner was introduced to her by her late aunt as capable of helping her purchase some property in Ilorin, the Kwara State capital.

“The lawmaker-elect sold to me another two plots of land with four bedroom bungalow at window level at Agric area of Ilorin.

“I paid ₦8,240,000 commission of which Ayinla informed me that the seller had received his money but he never paid the money to the seller up till date and never refunded my money,” the petitioner said.

“The lawmaker disclosed that he diverted the money to his personal use and promised to pay back after he receives his wardrobe allowance from the Kwara State House of Assembly,” she added.