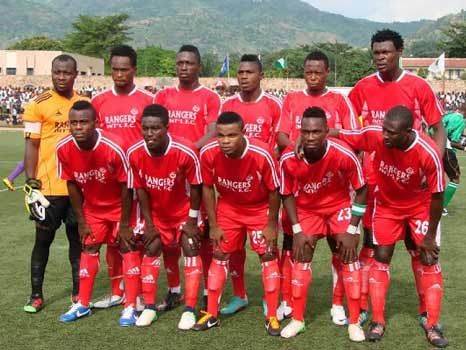 Except an improbable upset happens, Rangers International Football Club of Enugu are set to clinch the 2015/2016 Nigeria Football Professional League (NFPL). With just a game to spare, the coal city warlords who are also known as Flying Antelopes sit at the summit of the League table with 60 points. While Rangers’ last game is at home against El Kanemi Warriors of Maiduguri, their closest rivals, Rivers United will be on the road to Akwa United in Uyo.

Many soccer pundits and observers of Nigerian football see a good light in Rangers’ performance this season. Their imminent victory on Sunday, will end the Enugu based side’s near 23 years of no major title (the club last won the Nigerian League way back in 1984). For the club which gave the nation its first continental shield, a return to the zenith of African club football will no doubt bring back fond memories of the days of yore which produced the likes of the legendary Christian Chukwu, Emmanuel Okala, Sylvanus Okpala and Aloysius Atuegbu (of blessed memory).

As it stands now, the coaching crew, players and every other backroom staff of Rangers Football Club are on a  frenzy. Imama Amapakabo, coach of the side , who is also one of the assistants to Super Eagles manager, Gernot Rohr gave a tip on the secrets of the Flying Antelopes’ success: “The management decided to retain 80% of the squad used last season and the addition of a few players added more strength to the team. I personally had in my library, all the match tapes of all the Premier League clubs which I always watched with the players on the eve of every match depending on whom we were playing against.”

The highly rated tactician revealed to Sporting Life exclusively that the authorities of Rangers Football Club have placed an order for a special wine to celebrate the club’s amazing triumph which is expected to be sealed on Sunday, October 2.