We Won’t Use Weapons In Our Operation David Dance –IPOB 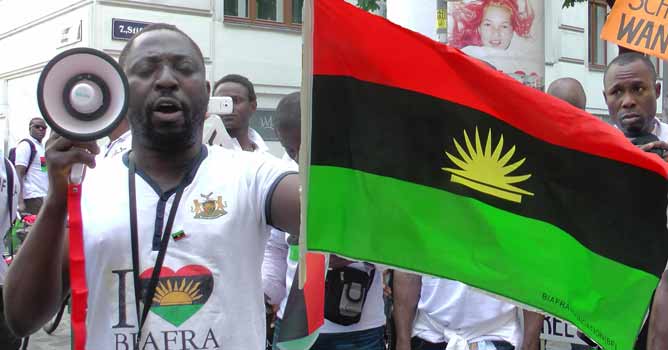 The Indigenous People of Biafra, IPOB, says it has launched its own counter action against the Nigerian Army’s Operation Python Dance. The group calls it Operation David Dance.

However, IPOB says, Operation David Dance will not use weapons but operate spiritually just as King David of the Bible did against the giant, Goliath.

In a statement by its Media and Publicity Secretary, Mr. Emma Powerful, IPOB claimed it has discovered a grand plan by the military to murder more south easterners under the guise of providing security. It therefore cautioned its members to avoid anything that would cause a clash between them and soldiers operating under Operation Python Dance.

In explaining Operation David Dance, Emma Powerful said: “We have launched our own ‘Operation David Dance’ which is recognized by God Almighty in the Bible. It was used by King David to dance against Goliath and all his bragging at the battle front.

“We are also aware that the worlds knows that the annual report from Amnesty International against the cold blooded killing of unarmed members of IPOB in Biafra land by the Nigerian security agents is correct and even the soldiers know that the report did not reveal details and other atrocities of the blood thirsty soldiers. “Our Operation David Dance will do to the military what David did to Goliath in the battlefield. The only difference is that we are not using weapons, but the spiritual warfare backed by Chukwu Okike Abiama that disgraced them with the Amnesty International report. “The world will never stop blaming them for killing innocent civilians and this is now gathering momentum  around the world. That is why they are running to cover the crime committed in a broad daylight.”