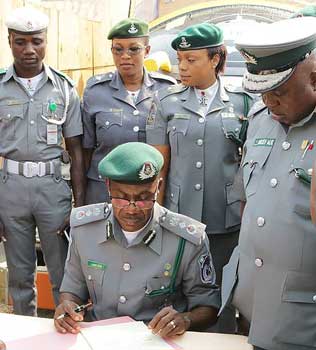 The Nigerian Customs Service has declared two officers who allegedly examined and cleared the container laden with 661 Pump Action rifles at the Apapa Port, Lagos, wanted.

According to the spokesman of the Federal Operations Unit Zone A Ikeja, Jerry Attah, the officers fled after the weapons were discovered by operatives of the FOU.

The Comptroller-General of Customs, Col. Hameed Ali (rtd), while briefing the press earlier this week, on the seizure of the rifles, said the service had arrested three suspects namely Oscar Okafor (the importer), Mahmud Hassan (the clearing agent) and Sadique Mustapha (an escort).

He explained that some other customs officers had been arrested and that investigations were ongoing. In his words: “Investigations have already commenced and I have directed that the dragnet should be wide open enough to fish out all persons involved in the importation and clearing of the consignment.”