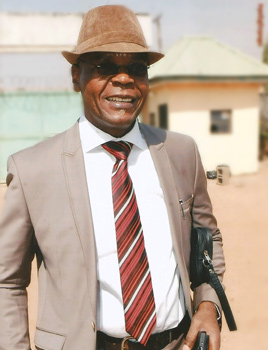 Mr. Charles Chibuzor Anyasi of blessed memory was an indefatigable businessman and a first rate entrepreneur.  Among other companies, he founded Sheriff Deputies Nigeria Ltd, a thriving industrial and private security company which has today made a bold mark in its area of operation. A professional of unassailable experience and integrity, he was a foremost administrator whose name still rings a bell in many places.

Mr. Charles Chibuzor Anyasi was born in Idumomo, Ogbeogu Quarters of Issele-Uku in present day Aniocha Local Government Area of Delta State in 1957 to Mr. and Mrs. Ochedo Anyasi. He had his primary education at Oligbo Pilgrim Baptist School.

He thereafter attended Oligbo Baptist Grammar School where he obtained his West African School Certificate in 1978. Two years later, he secured admission into the University of Lagos where his eccentric ideas earned him the name, ‘The Philosopher’ among his peers. There, he bagged a Bachelor of Arts (Education) in English Language.

He proceeded to the University of East London and obtained a Master of Science degree in Psychology in 1991.

Mr. Anyasi started his work life as a teacher in Lagos. He also had a brief stint in politics, contesting as a councilor under the platform of the defunct National Party of Nigeria. He had his first taste of entrepreneurship when he sourced funds from his family and set up a Palm Wine Bottling Company in Delta State.

A devout Christian and disciplinarian, Mr. Anyasi was a founding member of the security department of the Nigeria Ports Authority where he worked as a Shift Team Leader between 1985 and 1988.He established his first company, Ajiamarts which was a media company and a few years later, registered another company, Wasteminister, a waste management company which later metamorphosed into Kleenrite Nigeria Ltd.

In 1990, Mr. Anyasi merged these two companies into what is today known as Northside Group, where he served as Chairman and Chief Executive Officer.  Until his death on May 31, 2017, he was the Managing Director/CEO of Sheriff Deputies which was founded in 1997.  The company currently boasts of a workforce of over 3,000 men and women cutting across the Oil and Gas Sector, Academic Institutions, Pharmaceuticals, Insurance, Hospitality, Telecommunications, Media, Advertising, Transportation, Construction, Manufacturing, Printing and Automobile sectors.

He was also a committed philanthropist who  donated immeasurably to orphanages, old peoples’ homes, widows and children with special needs across the federation.

He was happily married to Mrs. Nwasoma Susan Anyasi who bore him three children namely Bigtown, Island and David-King Anyasi.

It is in recognition of his achievements in the sphere of Industrial, Corporate & Private Security Services that Mr. Charles Chibuzor Anyasi is deemed worthy to be posthumously conferred with the Development in Nigeria Merit Award which is part of the PSR National Awards 2018.