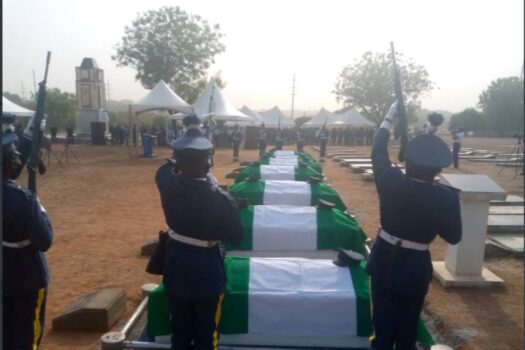 The Nigerian Air Force (NAF), Thursday, in Abuja, laid to rest the remains of seven of its officers who died in a plane crash on Sunday.

The bodies were lowered into the grave at exactly 1pm and accorded full Military honours and the traditional 21 gunshot salute.

It was an emotional event as colleagues of the late officers, including the Chief of Air Staff, Air Vice Marshal Oladayo Amao, wives and family members of deceased, wept uncontrollably.

The Chief of Air Staff in his address, described the deceased officers as courageous heroes in whom the Force had so much confidence.

According to him,”the loss of these confident, courageous and professional young officers and airmen must spur the rest of us not only to rededicate ourselves to the service of our Nation, but also to resolve that we shall relentlessly expose and fight all agents of destabilisation and extremism in our society. We must throw everything that we have into this fight, to ensure that our departed colleagues did not die in vain.

”The untimely death of these very promising gentlemen occurred on Sunday, 21 February 21 in Abuja while they were on active duty in service to our Fatherland. I must confess that, even at this moment, the Nigerian Air Force is still in palpable shock and grieving very deeply upon this loss of our gallant and courageous heroes, in whom we had so much confidence, with our expectations now suddenly and painfully cut short.

“We salute the supreme sacrifice of these young men, whose lot it became to give their lives in the defence of the peace which we all enjoy and often take for granted. These intelligent and disciplined young officers and airmen flew their quota of ongoing surveillance missions in the North East, North West and more recently in the North Central over Niger State and its environs in connection with the concerted efforts to secure the release of the staff and students abducted from the Government Science College Kagara, Niger State.

”As we resolve to rededicate ourselves to the cause of defending our Great Nation, let me at this juncture restate our profound commitment and unalloyed loyalty to the President, Commander-in-Chief of the Armed Forces, President Muhammadu Buhari GCFR, as he continues to lead the Nation’s collective effort at tackling the challenges bedeviling our national security.

“In addition to honouring the sacrifice and memory of our fallen comrades,this occasion offers us all an opportunity for sober reflections as we pray for the eternal repose of the gentle souls of our departed heroes. Their death is a huge loss to the Nigerian Air Force Family and indeed the entire Nation. They will be greatly missed but fondly remembered for their invaluable services to the Nation and Humanity. Today, as our late colleagues go to their final resting place, may the Lord be with them forever and may they rest assured that the Nigerian Air Force and indeed the Nation will remain ever grateful to them for their service and sacrifice.

“To the families of our deceased brothers, our prayers are with you at this time, as also those of people from everywhere, both within and outside the country. The overwhelming show of love, solidarity and support from everyone is a clear indication that the Nation, and indeed the entire Globe, shares in this grief with you.

“This was evident in the volume of condolence messages and visits from a wide range of personalities including the President, Commander-in-Chief, leadership of the National Assembly, Governors, Ministers, members of the Diplomatic Corp as well as many other prominent Nigerians. I therefore encourage you to be consoled by the knowledge that the entire Nation grieves with you on the loss of these shining, amiable and patriotic Nigerians who have laid down their lives in the service of their Fatherland.”

The Presiding priest and Director of NAF Chaplaincy, Reverend David Dogo Gani, described the death of the officers as a trying moment in the history of the country.

He prayed for the Grace to continue to look unto the Lord as the only succour in times of trouble.

Brief biography of the late officers

Late Flight Lieutenant Chiroma Haruna Gadzama, the pilot of the crashed plane, was born in January 11, 1990 in Kaduna. He hailed from Askira-Uba Local Government Area of Borno State. He was enlisted into the Nigerian Air Force as a member od Nigerian Defence Academy Regular Course 62 ON 14 August 2010 and commissioned pilot on 14 August 2020. Until his death, he was serving as a Squadron Pilot at 307 Executive Airlift Group, Abuja. He was single.

Flight Lieutenant Piyo Henry Piyo was born on 11 May 1991 in Jos. He hailed from Riyom Local Government Area of Plateau State. He was enlisted into the Nigerian Air Force as a member of the Nigerian Defence Academy Regular Course 62 on 14 August 2010 and commissioned Pilot on 12 September 2015. Until his death, he was serving as a Squadron Pilot at the 307 Executive Airlift Group Abuja. He was single.

Flying Officer Micheal Ifeanyi Okpara was born on 11 September 1995 at Takum in Taraba State. He hailed from Afikpo North Local Government Area of Ebonyi State. He was enlisted into the Nigerian Air Force as a member of the Nigerian Defence Academy Regular Course 65 on 21 September 2013 and commissioned Pilot Officer on 13 October 2018. He was married with two children

Warrant Officer Bassey Asuquo Etim, was born on 24 December 1973 in Kaduna. He hailed from Akpabuyo Local Government Area of Cross River State. He was enlisted into the Nigerian Air Force on 15 July 1996.

Flight Sergeant Olasunkanmi Ojo Olawunmi was born on 30 March 1983. He hailed from Ekiti South Local Government Area of Ekiti State. He was enlisted into the Nigerian Air Force on 1 March 2002.

Aircraftman Adewale Stephen Johnson was born on 9June 1996. He hailed from Ibadan South East Local Government Area of Oyo State. He was enlisted into the Nigerian Air Force on 5 August 2017.