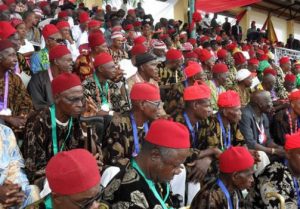 Ohanaeze Ndigbo has reacted sharp with concern to the position adopted by the Northern Governors Forum in their meeting with their traditional and religious leaders yesterday in Kaduna.

In a press statement issued and signed by the National Publicity Secretary of Ohanaeze Ndigbo, Chiedozie Alex Ogbonnia,the apex Igbo socio-cultural organization,expressed consternation on a part of the resolution by the Northern States Governors’ Forum  with Northern States Emirs and Chiefs held on Monday, September 27,  2021 at the Council Chamber, Sir Kashim Ibrahim House, Kaduna,which read that “the Forum unanimously condemn the statement by the Southern Governors Forum that the Presidency must go to the South in 2023. The statement is quite contradictory with the provision of the Constitution of the Federal Republic of Nigeria (1999) as amended ….”

Ohanaeze said :”The above remarks by the leaders of the North indicate a bleak future for Nigeria. It is most regrettable that the North are undisturbed that Nigeria is fast collapsing under its leadership. The Forum failed to recognize that at the moment, Nigeria is confronted with the most precarious omens full of uncertainty, doubts, insecurity and bloodshed. The Chairman of the Northern  States Governors Forum, Governor Simon Lalong can attest that the people of Plateau State had never in history witnessed the number of deaths as has taken place under his watch as governor.”

Ohanaeze regretted that “The banditry in Zamfara, Katsina, Kaduna and Jigawa States is terrifying. Benue State has turned into a killing field. The States of Yobe and Borno are worst hit by the menace of Boko Haram; etc. Several schools in the North could not open because of kidnappers and millions of children are on the street as beggars. The Nigerian currency has lost its value. Unemployment has skyrocketed; and Nigeria has become the poverty capital of the world…..and the Northern Governors, the Sultan and the Emirs instead of seeking solution to Nigerian problems were busy strategizing on how to retain power in 2023. This is most unconscionable, to say the least.”

“Let it be made abundantly clear that if Presidency is a panacea to people’s problems, the North would have become the Netherlands of Africa. This is because the North had Abubakar Tafawa Balewa, Yakubu Gowon, Murtala Mohammed, Shehu Shagari, Muhammadu Buhari, Ibrahim Babangida, Sani Abacha, Abdulsalam Abubakar, Musa Yaradua, Muhammadu Buhari, yet the problems of the North are on the increase”, Ohanaeze contended.
The spokesman expressed regrets and viewed that ” It is most worrisome that the Sultan of Sokoto, Alh. Muhammadu Sa’ad Abubakar, CFR, the spiritual leader of the Nigerian Muslims, one of the most respected Sultans in the recent history and the living conscience of the North, took part in such subversion. For the avoidance of doubt, there is peace in the progressive societies because men of conscience are more in number. On the other hand, the crises in Nigeria is a product of greed, injustice, religion without sacrifice and impunity.”

“The position of the Southern Governors is simply restating the obvious.”.

Ogbonnia went down memory lane to the inception of power shift between the South and North,recalling that ” A gentleman agreement was reached at the NUC Conference Centre, Abuja in 1998 between the North and the South. The Late Dr. Chuba Okadigbo spoke for the entire South and Alh. Abubakar Rimi, also of blessed memory spoke for the North. It was agreed that after Gen. Abdulsalam Abubakar as the Head of State, that the presidency should shift to the South. That accounted for the emergence of the presidential flag bearers of the mainstream political parties from the South West. Chief Olusegun Obasanjo respected the agreement and handed over to the North in the person of Musa Yar’Adua. Again, Goodluck Jonathan, a Southerner, respected the gentleman agreement and handed over to the North in the person of President Muhammadu Buhari. Therefore, the least that is expected from the North is a show of profound gratitude to the entire South for their large heart, equanimity and sportsmanship.”

“Furthermore, it is in the interest of every Nigerian that there should be a paradigm shift to governance techniques. Ohanaeze Ndigbo Worldwide unequivocally stands with the 17 Southern Governors and any black leg among them will incur the wrath of history”, pointing out that ” Nigeria has two major groups of people. Those that cherish the corporate existence of Nigeria on one hand and those that do not value the unity, peace and progress of Nigeria on the other. The latter indulge in reckless nepotism, ethnocentrism, avarice, supremacist mentality, hollow expansionism and poor judgment of history. It is the law of nature that light illuminates and that in religion, both the Lord Jesus Christ and Prophet Mohammed stood for truth.”

He said that “Ohanaeze uses this singular opportunity to express disappointment over the unholy manouvres and alliances by the members of the Peoples’ Democratic Party (PDP) to zone the presidential seat for the 2023 general election to the Northern Nigeria. The exponents of this agenda, in their jaundiced calculations, believe that it is a sure way of regaining power from the All Peoples Congress (APC). Experience would have taught them that to zone their presidential position to the North is an orchestrated requiem for the party; because more PDP Governors and grassroots will surely desert them,” he forewarned.

Ohanaeze reminded the PDP that the “South East has made unquantifiable sacrifices for PDP beginning from the time of Dr. Alex. Ekwueme. If by way of politics without principles the Southerners in PDP place their personal narrow interests over the interest of their people, the verdict of history will surely be harsh on them.

Ohanaeze Ndigbo led by Ambassador Professor George Obiozor reiterates that the bane of Nigeria is raw injustice especially targeted against the Igbo and until we begin to wean ourselves of the Igbophobia and rather harness individual and group resourcefulness, creativity, ingenuity and initiatives wherever they are found, Nigeria will remain on the downward spiral”,he submitted grimly.