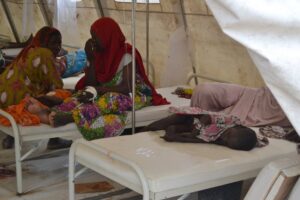 One person have been killed with 13 others hospitalised following cholera outbreak in the Jen-Ardido community of Karim Lamido Local Government Area of Taraba State.

Chairman of the LGA, Markus Hamidu on Thursday confirmed the incident to Channels Television in Jalingo, the state capital.

He added that efforts are on to rescue all infected persons in the hospital.

”It was recorded yesterday that one person died, and thirteen others hospitalised.

”Today, we have not received any information regarding more dead or more victims as health practitioners have been detailed to the area to curtail further outbreak.

”I really sympathize with the victims and henceforth we will not fold our hands in the struggle to cure them and the area from the ailment,” Hamidu said.