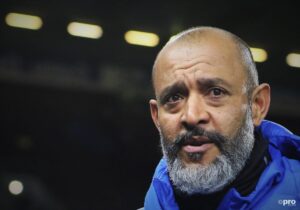 Nuno Espirito Santo has been sacked by Tottenham less than five months after being appointed as head coach.

Former Chelsea boss Antonio Conte, who Spurs targeted before appointing Nuno in the summer, has been offered an 18-month deal by Tottenham and will fly into London for face-to-face talks on Monday, according to Sky in Italy.

Negotiations with the Italian, who has been out of work since leaving Inter Milan in the summer, are understood to be in their final stages.

Tottenham are eighth in the Premier League, 10 points off leaders Chelsea, after the 3-0 home defeat to Manchester United on Saturday.

Nuno, 47, signed a two-year contract in June following a protracted search to find Jose Mourinho’s successor, with his tenure lasting just beyond four months and a total of only 17 games.

The departure of Nuno, who left Wolves in May after four seasons in charge, means Tottenham are looking for their fourth permanent manager in the last three years.