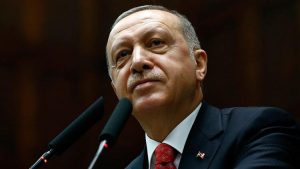 President Recep Tayyip Erdogan has confirmed Turkey’s opposition to NATO membership for Finland and Sweden, shooting down a proposal by the Nordic countries to send delegations to Ankara to address the matter.

“We will not say ‘yes’ to those [countries] who apply sanctions to Turkey to join security organisation NATO,” Erdogan said at a news conference on Monday, referring to Sweden’s 2019 decision to suspend arms sales to Turkey over its military operation in neighbouring Syria.

“Neither of the countries have a clear stance against terror organisations,” Erdogan said. “How can we trust them?”

Without the support of all Nato members, Sweden and Finland cannot join the military alliance.

On Monday, Sweden said Europe was living in a dangerous new reality, referring to Russia’s invasion of Ukraine.

Russian President Vladimir Putin said the move by Finland and Sweden to join the 30-member military alliance did not threaten Moscow directly – but stressed that any expansion of military infrastructure would trigger a response from the Kremlin.

All member states must agree that a new country can join Nato, therefore Sweden and Finland require Turkey’s support in their bid to join the military alliance.

Mr Erdogan said Swedish and Finnish delegations should not bother going to Ankara, Turkey’s capital, to convince it to approve their Nato bid.

His government has also pledged to block applications from countries that have imposed sanctions on it.

In 2019, both Nordic nations slapped an arms embargo on Ankara after its incursion into Syria.

Speaking in parliament in Helsinki on Monday, Finnish Foreign Minister Pekka Haavisto said he was surprised by Turkey’s stance, but added that his government was not interested in “bargaining” with Mr Erdogan.

It was joined by neighbour Sweden on Saturday in a move that will end the Scandinavian country’s centuries-long military non-alignment.

She said Europe was now living in a dangerous new reality, referring to Russia’s invasion of Ukraine.

“We are leaving one era behind us and entering a new one,” Ms Andersson told lawmakers during a debate in Stockholm, also on Monday.

She said a formal application could be handed in within several days and would be synchronised with Finland. Nato has signalled its willingness to admit the two new members.

However, Ms Andersson stressed that Sweden did not want permanent Nato bases or nuclear weapons on its territory.

Norway, Denmark and Iceland – all Nato members – immediately said they were ready to support Sweden and Finland by all means necessary if they came under attack.

The UK, also a Nato member, has already given security guarantees to Sweden and Finland to cover the transition period.

Monday’s announcement by Sweden came as Nato began one of its biggest exercises in the Baltic region, involving some 15,000 troops. Named “Hedgehog”, the drills in Estonia involve 10 countries, including Finland and Sweden.