Tinubu And Obasanjo Meet Behind Closed Doors In Abeokuta 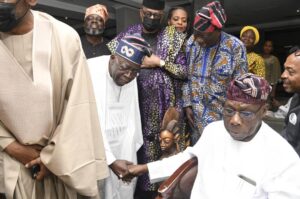 The presidential candidate of the All Progressives Congress (APC),Asiwaju Bola Tinubu is currently meeting with former President Olusegun Obasanjo, behind closed-doors in Abeokuta, the Ogun State Capital.

Scores of supporters of Asiwaju also stormed the venue of the meeting to show support for their candidate of choice.

Tinubu arrived at the Penthouse of the Olusegun Obasanjo Presidential Library, Oke- Mosan, Abeokuta, the Ogun State capital, in his chopper at about 1:09pm in company of some party leaders.

He was accompanied by the Speaker of the Federal House of Representatives, Femi Gbajabiamila, first interim Chairman of the All Progressives Congress, Chief Bisi Akande, the governor of Ogun State,Dapo Abiodun, former Governor Olusegun Osoba, Otunba Gbenga Daniel among other dignitaries.

The meeting is believed to be in connection with ambition of Tinubu in the coming elections.