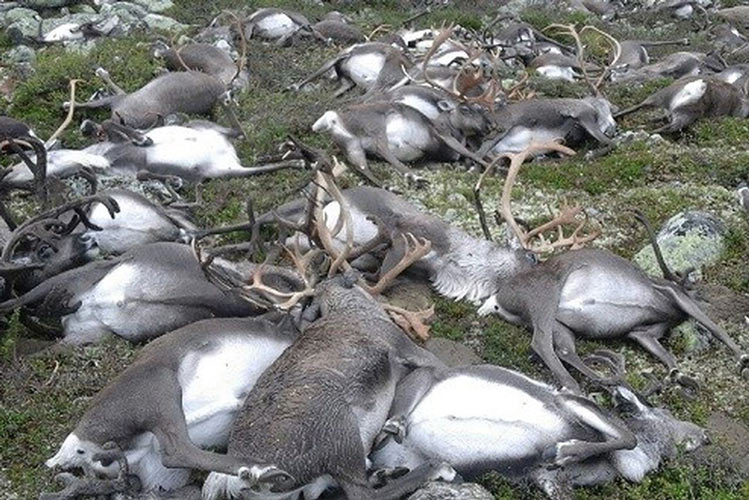 A mountain plateau in southern Norway that is popular among tourists and hikers, is known for its natural beauty. As the seasons change, thousands of reindeer migrate across the plateau, moving between drier lands in the east, where they graze on lichens, and wetter lands in the west, where they breed.

But on Friday, a storm transformed the plateau into a grisly scene. Lightning appeared to have killed an entire herd: 323 reindeer at last count, including 70 calves and five reindeer that had to be put down because they were severely injured in the storm.

“We are not familiar with any previous happening on such a scale,” Kjartan Knutsen, an official at the Nature Inspectorate, part of the Norwegian Environment Agency, said in a phone interview on Monday. “Individual animals do from time to time get killed by lightning, and there are incidents where sheep have been killed in groups of 10 or even 20, but we have never seen anything like this.”

Officials surmised that an extremely high discharge of electricity from the storm on Friday afternoon — and the interaction of the lightning with the earth and water — had electrocuted the animals.

“Reindeer often huddle together in groups during thunderstorms,” Mr. Knutsen said. “It is a strategy they have to survive, but in this case their survival strategy might have cost them their life. The corpses are all lying in one big group, piled together.”

An employee of the agency found the corpses while conducting a count in connection with the culling of the herd, through a controlled hunt. The hunt, which began on Aug. 20 and is scheduled to last through the end of September, is intended to destroy about 2,000 to 3,000 of the roughly 11,000 to 15,000 reindeer, and plans for the hunt are continuing.

Olav Strand, a senior researcher at the Norwegian Institute for Nature Research, inspected the site on Sunday, and said the animals appeared to have died “as if someone just turned off a switch.” The air was filled with a smell that seemed both sweet and sour, he said.

“The lightning was fierce, the amount of water pouring down that day was incredible, and the whole group was found dead at the scene, placed as they usually are, huddled into a group, with some standing in two lines on the side and a larger congregation in the middle,” he said. “They were standing on a hill, moving up that hill. They seem to have fallen dead on the ground, exactly where they stood.”

He said the only comparable event he could recall in Norway involved 280 or so deer dying in an avalanche at Snohetta, a mountain peak in central Norway, in 2005. “Reindeer are herd animals, unlike elks,” he said. “They gather in groups, and that is how accidents like this one can happen.”

Mr. Strand said it was appropriate for the hunt to continue. “We hope this year’s hunt will bring the amount down by 2,000 to 3,000 animals, to get a balance between population and resources in the areas,” he said. “However, had this incident happened to a smaller population than the one in Hardangervidda, we might have had to take measures.”

Anton Krag, a zoologist and the chief executive of the Norwegian Animal Protection Alliance, said he hoped the publicity surrounding the reindeer deaths would lead to greater awareness of the dangers reindeer face.

“We are shocked by the extent of this tragedy,” he said. “However, this freak event had unavoidable natural causes and is overshadowed by the animal suffering inflicted on reindeer by human activity. Each year, hundreds of reindeer are killed by trains because the Norwegian government is not willing to invest in preventive measures like fences. Hundreds of reindeer are also wounded by trophy hunters for the sake of recreation.”

Mr. Knutsen and Mr. Strand pointed to one upside: the deaths of the 323 reindeer offer an opportunity to increase the sample size for a project to map the prevalence of chronic wasting disease, a contagious neurological disorder that is related to mad cow disease and that was detected in reindeer in southern Norway in March.

The authorities had previously asked hunters to submit the heads of up to 4,200 animals as they worked to contain the disease, which attacks the brains of deer, caribou, elk and moose.

Mr. Knutsen said that officials would use most of the animals killed in the storm to add to the sample.

“The test results for the herd killed by lightning can give crucial answers in understanding how much the disease has spread,” he said. As for the rest of the reindeer corpses, he said, “That remains to be decided upon within the next couple of days. The normal routine in such cases is to let nature take its course.”

Culled from the New York Times