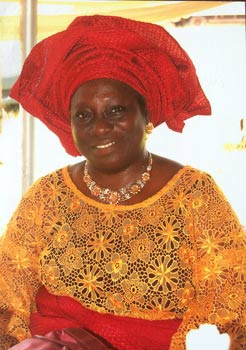 Mrs. Juliana Bodunde Aluko is a distinguished professional who has served her country diligently in the area of healthcare delivery. She is a specialist in prosthetics and orthotics, an area which is very important to orthopaedic medicine. She has the record of being the first woman to be made Assistant Director, Prosthetics & Orthotics by the Federal Ministry of Health. Since the year 2010, she has worked as Head, Department of Prosthetics & Orthotics, National Orthopaedic Hospital, Igbobi, Lagos.

Mrs. Juliana Bodunde Aluko was born on December 31, 1958 at Iju in Akure North Local Government Area of Ondo State to the family of Pa Gabriel and Madam Felicia Oligiobi Ogunbuyide.

She attended Saint Stephen’s Primary School, Iju-Akure from 1963 to 1968 and got her First School Leaving Certificate.

In 1971, she gained admission into Anglican Grammar School, Iju–Itaogbolu, Ondo State. She went on transfer to Fiwasaiye Girls Grammar School, Akure in 1972, where she obtained her West African School Certificate in 1976.

She came back to Nigeria in August, 1982 and did her National Youth Service (N.Y.S.C.) at Military Hospital, Odogbo, Ibadan from September 1982 to August, 1983.

Her work involves attending to patients at the Prosthetics/Orthotics Department by providing prostheses/orthoses for them. This enhances their quality of life, corrects deformities and supports existing ones that are not correctable.

She has attended many training workshops and seminars relating to her job and healthcare delivery generally.

Juliana was married to Mr. Isaac Bissy Aluko in 1984. That union has been blessed with four children and a grandchild. She unfortunately lost the husband in a ghastly motor accident in 1997.

Mrs. Aluko effectively speaks English, French and Yoruba. She loves reading and watching documentary films. She is a devout Christian.

It is in recognition of her contribution to national development in the area of Healthcare Services that Mrs. Juliana Bodunde Aluko is deemed worthy to be conferred with the Woman of Merit Gold Award.