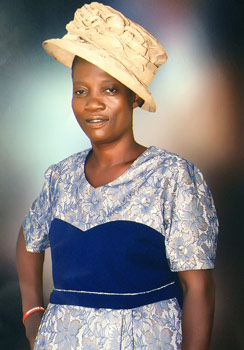 Mrs. Stella Odufisan-Oladunjoye has distinguished herself in the nursing profession. Her working life has been devoted to rendering patriotic service in healthcare delivery at the local government level.

Stella was born on April 4, 1963 in Epe Town. However, her primary education was at St. Michael Primary School, Mushin from 1970 to 1976. She did her secondary school at the famous Methodist Girls’ High School, Yaba where she earned her West African School Certificate in 1981.

Mrs. Odufisan-Oladunjoye is currently studying for a degree in law at the National Open University of Nigeria. For a woman who has an undying thirst for knowledge and professional excellence, Stella Odufisan-Oladunjoye has won recognitions and honours on several fronts.

She won the recognition of Best Graduating Student, School of Public Health Nursing, Ikoyi, Lagos in 1993. She was Best Graduating Student of the United Bible University in 2013. That same year, she was conferred with the Eredo Grassroots Leadership Award for her contribution to the development of the community. In 2014, she won the Award of Excellence of Epe Students Solidarity Movement.

She was a member of the Medical Team of the Lagos State Christian Pilgrimage in 2013. She has the privilege of serving as Special Adviser on Community Matters to H.R.M., Oba Ayodele Aliru Kolawole, Ilufemiloye 1 of Poka Land.

It is in recognition of her contribution to national development in the field of Nursing, that Mrs. Stella Odudolapo Odufisan-Oladunjoye is deemed worthy to be conferred with the Woman of Merit Gold Award.