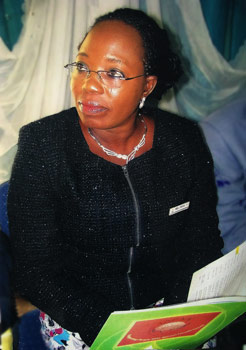 Excellence is the other name of Mrs. Taiwo Christiannah Omirin. She is a uniquely quiet achiever but laurels have chased her wherever she finds herself. She is indeed, a woman of merit.

Mrs. Omirin is the current Principal and Head of School at the School of Psychiatric Nursing, Neuropsychiatric Hospital, Aro, Abeokuta. She is an Assistant Director of Nursing (Education).

Taiwo was born into the family of Pa Timothy Edun and Mrs. Taiwo Edun in the town of Ayetoro in Yewa North Local Government Area of Ogun State on March 24, 1966.

In her quest for professional growth, she went for General Nursing Training at the School of Nursing, Ijebu-Ode, Ogun State between 1987 and 1988.

After graduation from the School of Midwifery, she worked briefly as a Registered Midwife at the Sacred Heart Hospital, Abeokuta between September, 1986 and May, 1987.

In her quest for self actualization, Mrs. Omirin proceeded to the Premier University, University of Ibadan for her B.Sc. Nursing between 1995 and 1999 after which she worked briefly with the University College Hospital (UCH), Ibadan as a Registered Nurse/Midwife.

She joined the service of Neuropsychiatric Hospital, Aro, Abeokuta as a Nurse Tutor in July, 1999 from where she rose to the present rank of an Assistant Director of Nursing (Education).

She further proceeded to the University of Ibadan for an M.Sc degree in Medical Sociology between 1999 and 2000. Her Psychiatric Nursing Training took place between 2002 and 2003 at the School of Psychiatric Nursing, Neuropsychiatric Hospital, Aro, Abeokuta.

Mrs. Taiwo Omirin has acted in various capacities as a resource person and guest lecturer at different seminars and workshops where she has presented many papers in the Nursing field and other areas.

She was appointed as a member of the Board of the Nursing and Midwifery Council of Nigeria (NMCN) in November, 2013, and she was an active member until the dissolution of the Board in July, 2015.

Currently, Taiwo Omirin is the Principal and Head of School of Psychiatric Nursing, Neuropsychiatric Hospital, Aro, and an Assistant Director of Nursing (Education).

She is an ordained minister in the Redeemed Christian Church of God (RCCG), and a pastor in charge of a parish. She is married to Dr E.S. Omirin, a medical practitioner, and the union is blessed with children.

It is in recognition of her contribution to national development in the field of Nursing Education that Mrs. Taiwo Christiannah Omirin is deemed worthy to be conferred with the Woman of Merit Gold Award.