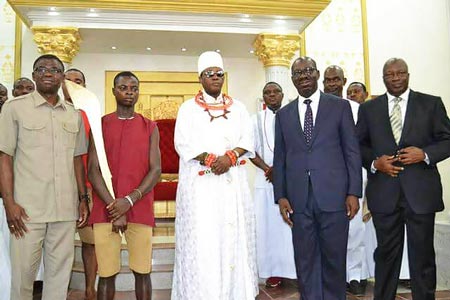 The Oba of Benin, by tradition rarely leaves his palace. Indeed, it is largely believed that the Oba does not pay visits to individuals.

Friday, January 20, was however an exception. Oba Eware II paid a courtesy visit to the Governor of Edo State, Godwin Obaseki at the Government House in Benin City.

The staff at the Government House were largely surprised that the widely respected king was visiting. Even so, they were led by the governor to accord the monarch a very befitting reception.

On the reason for his visit, Oba Ewuare II told the governor: “Having paid me many visits, I decided that I would pay you a visit early this year.”

Apart from that, the Oba had a request to make to Governor Obaseki. He wanted the governor to work on the possibility of having an export processing zone in Edo State which would handle agricultural commodities.