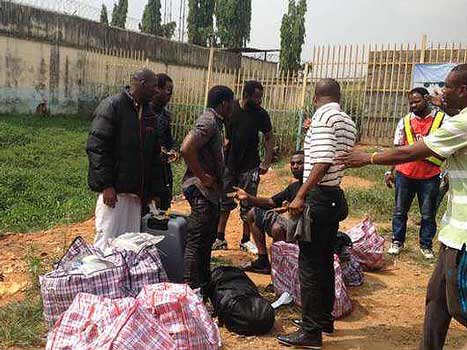 Forty-one Nigerians who were deported from the United Kingdom arrived Lagos this morning. After the plane carrying them, an unmarked Air Bus, touched down at the Murtala Mohammed International Airport (MMIA), Ikeja, at exactly 7:40am, they were taken to the Cargo Terminal.

According to the spokesperson of the National Emergency Management Agency (NEMA) South-West Zone, Ibrahim Farinloye, the deportees included residents whose documents had expired and prisoners whose terms of imprisonment were nearing completion and will complete their jail terms in Nigeria.

Among those who alighted from the plane were elderly people who looked dejected, worried and unsure of what the immediate future holds for them in Nigeria.

Officials of NEMA, Nigeria Immigration Service (NIS), Policeman and Aviation Security Personnel were on ground to receive the deportees. The 41 deportees are made up of 33 males and 8 females.