Our Biggest Challenge Is The Nation’s Economy  –Osinbajo 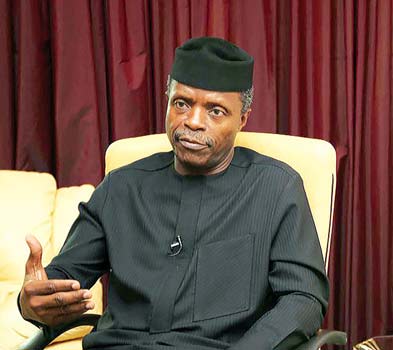 Acting Nigerian President, Professor Yemi Osinbajo has said  the greatest challenge facing the current government is how to turn around the economic status of the country.

He made the revelation on Monday at an event to mark the nation’s Democracy Day and to celebrate two years of the administration of General Muhammadu Buhari, whose prolonged absence on medical vacation has continued to raise concerns.

“Let me first express just how concerned we have been since this administration took office, about the impact of the economic difficulties on our citizens,” Osinbajo said at the event .

He further stated that the government is trying its best to lift the country out of economic recession by shifting away from its over-dependence on imports and oil and investing heavily on agriculture and infrastructure.

According to recent data, the nation’s economy has contracted for five quarters in a row, a downturn driven by low oil prices, low production and output levels and a shortage of foreign currency.