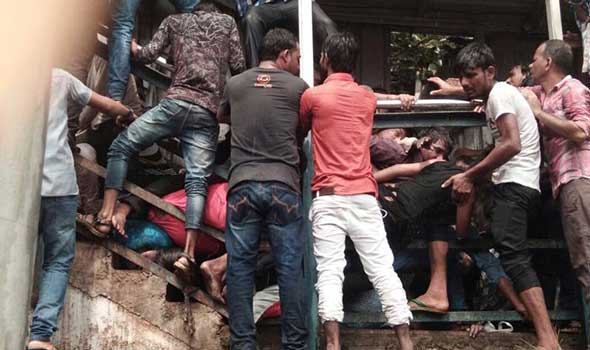 A stampede which broke out on a crowded pedestrian bridge connecting two railway stations in the Indian city of Mumbai during the Friday morning rush has left 22 people dead and about 30 others injured.

According to Gansham Patel, a Mumbai Police officer, when falling concrete hit the bridge railing, people in the crowd thought the bridge would collapse and the ensuing surge to escape led to the stampede.

The tragedy was made worse because many people had at the time of the incident been crowding under the canopy covering the bridge to shield themselves from the heavy morning rain.

The bridge which connects the Elphinstone and Parel railway stations has also been used by street sellers hawking their wares on the narrow overpass which made it even easier for most of the victims to be trampled upon.

The Indian Prime Minister, Narendra Modi has expressed his condolences to the families and friends of those who lost their lives even as the Police appealed to well – meaning citizens to donate blood to help the injured.

Deadly stampedes are common in the densely populated country where many cities are not equipped to deal with large crowds gathering in small areas, with few safety or crowd control measures.

In October 2013, more than 110 people, mostly women and children were killed during a stampede in Madhya Pradesh SSState in Central India.