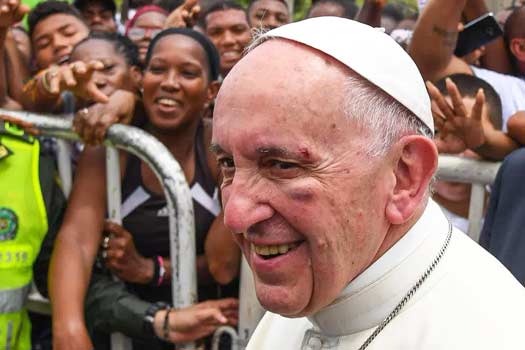 Pope Francis on Sunday sustained minor injuries when he lost his balance and hit his head against a vehicle barrier during his visit to Cartagena, Colombia.

Riding in his Popemobile, a customised vehicle with bullet proof glass designed to protect him, the 80-year-old Pontiff’s face made contact with the barrier in front of him when the vehicle abruptly stopped.

He cut his left eyebrow and bruised his cheekbone in the process even as the blood that dripped from the injuries stained his white cassock.

A spokesman for the Pope while confirming the incident which was captured on video, said he was receiving “ice treatment” for the injuries to his eye and cheekbone.

The Pope who left Colombia on Sunday, had been in the South American country since Wednesday last week, making stops at Bogota, Medellin and Cartegena where he appealed to citizens of the country to “untie the knots of violence” binding them following 50-years of civil war.