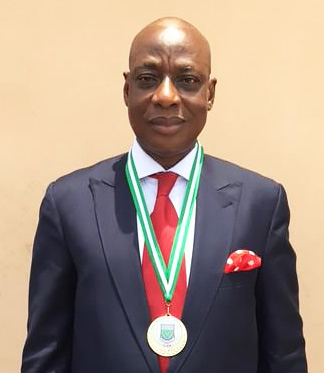 Chief Amobi Nwokafor is a highly distinguished and resourceful accountant. He has also made a mark in corporate management and boardroom administration. He is the Founder and Managing Partner of a thriving accounting practice, Amobi Nwokafor and Company (Chartered Accountants) which is based in Lagos.

He is also a member of the Institute of Directors of Nigeria (IoD), the Nigerian Institute of Management (NIM) and the Chartered Institute of Arbitrators. Finally, this thorough – bred professional is a recognized and Distinguished Fellow of the Professional Excellence Foundation of Nigeria (PEFON).

Amobi Nwokafor was born on November 20, 1962 in Awka, Anambra State. His education began at Agulu Primary School, Awka where he earned his First School Leaving Certificate in 1974. He then attended Comprehensive Secondary School, Nawfia and had his West African School Certificate in 1979.

He graduated with a B.Sc (Hons.) Accountancy from the University of Nigeria Nsukka in 1985. He went on to earn a Masters in Banking & Finance (MBF) from Delta State University, Abraka. He is currently working towards a doctorate, a Ph.D in Strategic Management at Babcock University, Ilisan Remo, Ogun State.

Nwokafor’s working experience began in Lagos when, as a Youth Corper, he was engaged at the Lagos State Ministry of Finance from 1985 to 1986. Youth Service over, he joined Adi Ekwenugo & Co. (Chartered Accountants) where he worked as Assistant Manager, Audit from 1986 to 1988.

He joined Inter–Continental Assurance Company in 1988 and worked as Chief Accountant and Head of Administration until 1992. The following year, he worked as Assistant General Manager, Finance/Accounts & Investment at Golden Trust Finance Ltd.

Amobi Nwokafor went back to the insurance industry in 1994 as General Manager/Head of Finance & Accounts of International Standard Insurers Ltd. He occupied that position until 1997.

In the year 1998, Amobi Nwokafor & Co. (Chartered Accountants) emerged on the nation’s professional accountancy space. With him as Managing Partner, the firm has won a lot of acknowledgement for itself.

No doubt, Chief Amobi Nwokafor is widely recognized in the accounting profession. He is the incumbent (2016 – 2017) Chairman of the Lagos Mainland and District Society of the Institute of Chartered Accountants of Nigeria.

Outside business and the corporate world, he has also won a lot of recognition. Since the year 2016, he has been the President-General of Awka Development Union of Nigeria. He has been the Chairman, Board of Trustees, of Awka Ambassadors Club since 2010. He was Rotary Club of Festac Metropolitan World Class President (2015/2016).

Nwokafor is a Knight of St. Paul (KSP) of the Anglican Communion, Awka Diocese. Married with Children, he loves reading, swimming and football as pastimes.

It is in recognition of his contribution to national development in the field of Accounting that Chief (Sir) Amobi Nwokafor is deemed worthy to be conferred with the Development In Nigeria Merit Award which is part of the 2017 PSR National Awards.