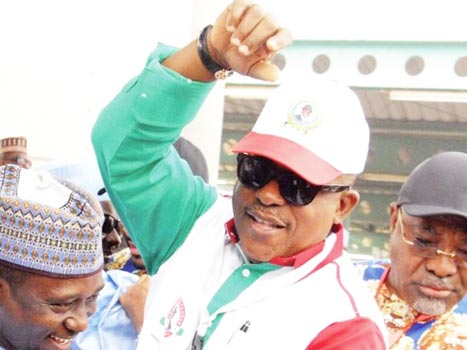 The newly -elected National Chairman of the Peoples Democratic Party (PDP), Uche Secondus says the tenancy of President Muhammadu Buhari at the Presidential Villa in Aso Rock would expire on May 28, 2019.

Secondus, who stated this after he was elected to lead the opposition party also called on PDP members to unite and work together towards fulfilling the herculean mandate of ousting the ruling All Progressives Congress (APC).

His words: “By my understanding, the mandate you have given us today is clear and unambiguous. It is to return our party to power come 2019.

“As Herculean as this mandate seems, I know its achievable. My campaign pillars for this election are ‘To Rebuild, Reposition and Regain.” Let me assure you great members and leaders of our party, that by the grace of God, and with all hands on deck, the brief tenancy of the All Progressives Congress (APC) in Aso Rock Villa expires on May 28, 2019. By this, we serve them a quit notice.”

While debunking allegations of rigging during Saturday’s elective convention of the PDP, Secondus thanked his opponents for being part of history as the contest marked the stiffest that would take place towards producing the leadership of a political party in Nigeria.

He further acknowledged that the party had learnt from the mistakes of the past and would therefore adhere strictly to internal democracy with a deliberate policy to return power to the people.