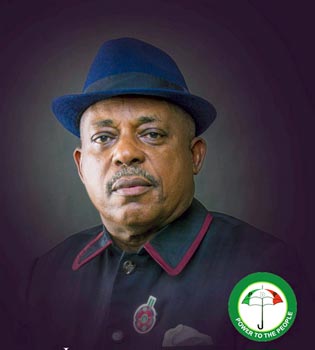 The newly-elected National Chairman of the Peoples Democratic Party (PDP), Prince Uche Secondus has distanced himself from media reports that cited him as insinuating that former Vice President Atiku Abubakar was spying for the ruling All Progressives Congress (APC).

In a statement issued through his media office on Wednesday, Secondus laughed off the reports as baseless fabrications and called on all well – meaning Nigerians to disregard such publications which he said were aimed at disuniting and distracting the PDP from achieving its set goal of ousting the APC in 2019.

The statement read: “The attention of the media office of the National Chairman of the Peoples Democratic Party, PDP, Prince Uche Secondus has been drawn to a laughable fabrication in the social media quoting the National Chairman as saying to nameless reporters that the former Vice President Atiku Abubakar who recently returned to the party is working as agent for both President Muhammadu Buhari and the ruling APC.

“This is the kind of thing that should not merit a response but because of records and harmless social media followers who may fall victim of such dangerous distortions, we want to say that Prince Secondus got his mandate riding on his experience in party management. Such experience includes but is not limited to knowing what to say, how to say it and when.

“Prince Secondus knows that as National Chairman, that after the December 10, 2017 mandate, he has become the leader of all members of this party including all its presidential hopefuls and cannot for any reason position himself in favour of or disfavor of any of the aspirants and this applies to all levels of the party.

“Aware of the enormous challenges before him in rebuilding, repositioning and regaining power come 2019, the PDP National Chairman is presently preoccupied with the huge task ahead of him.

“National Chairman’s media office, therefore wants to alert Nigerians that in coming days and months ahead, more of such baseless publications would be seen ostensibly to distract and create division among us but they have failed because with the new spirit in PDP, we would not be distracted from our set goal of chasing APC out of Aso Rock.

“We therefore want to advice all Nigerians particularly our beloved members to disregard any of such publications which is not from our office or from credible media houses.”