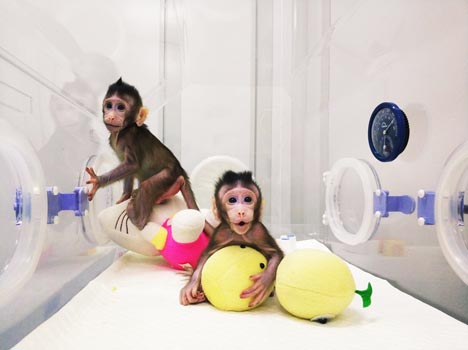 Doctors in China have taken a step closer towards cloning humans as they have successfully cloned two monkeys using the “Dolly the Sheep” method of transferring DNA.

The identical macaque monkeys, Zhong Zhong and Hua Hua were born 8 and 6 weeks ago, making them the world’s first primates to be cloned from DNA and marks a watershed in cloning research that had raised major ethical questions in the past.

The researchers said they had cleared the final hurdle towards human cloning and offered hope for the treatment of Alzheimer’s, Parkinson’s and other diseases.

Dr. Mu-Ming Poo of the Shanghai research team when asked if the same method could be used on human cells replied: “Yes, a macaque monkey is a primate species, humans are primates – the technical barrier is now broken.”

Zhong Zhong and Hua Hua were cloned using the somatic cell nuclear transfer technique where DNA was taken from a macaque foetus cell, put in an egg and fertilized artificially to form an embryo which was later born to a surrogate mother.