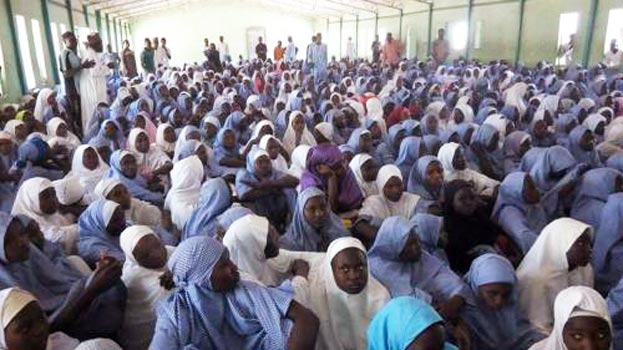 The Nigeria Airforce (NAF) has stepped up its day and night search for the 110 school girls abducted from Dapchi town in Yobe State last week by suspected Boko Haram insurgents.

The Federal Government on Sunday said 110 students of the Government Girls’ Science Technical College, Dapchi were still uncounted for, a figure which is higher than the 105 given by the parents of the missing students over the weekend.

Minister of Information, Culture and National Orientation, Lai Mohammed gave the latest figure after a meeting of the Federal Government delegation with the Yobe State Governor, Ibrahim Gaidam and other stakeholders in Damaturu over the February 19 attack.

A statement released by NAF Director of Public Relations and Information, Air Vice Marshall Olatokunbo Adesanya on Sunday called on Nigerians, including rural dwellers who might have information that could lead to the location of the girls to forward such to military authorities or any other security agency.

“The Nigeria Air Force (NAF) has deployed additional air assets, including Intelligence, Surveillance and Reconnaissance (ISR) platforms to the North-East in a renewed effort at locating the missing Dapchi girls.

“Before now, following confirmation of reports that some of the girls were yet to be accounted for, the NAF had deployed some ISR platforms and helicopters to search for and possibly locate the missing girls as well as the vague Boko Haram Terrorists (BHTs).

“Although the search operations were conducted in a covert manner, for reasons, the efforts did not yield the desired results.

“Accordingly, the Chief of Air Staff (CAS), Air Marshal Sadique Abubakar, directed the immediate deployment of additional air assets and NAF personnel to the Northeast with the sole mission of conducting day and night searches for the missing girls.

“It is noteworthy that the renewed efforts at locating the girls are being conducted in close liaison with other surface security forces. While the NAF will spare no efforts at possibly locating the girls via its air operations, it also seizes the opportunity to call on anyone, especially the locals, who might have any information that could lead to the location of the girls to bring such information forward to NAF authorities or other relevant security agencies,” the statement said.

He further stressed that no stone would be left unturned towards locating and rescuing the 110 girls, a figure he said was arrived at based on the briefings from the principal of the college, Hajia Adama Abdulkarim and the Yobe State Commissioner for Education, Hon. Mohammed Lamin, that 906 students out of who 796 have been accounted for were in school on the day of the attack.