Reactions Trail T.Y. Danjuma’s Call On Nigerians To Defend Themselves 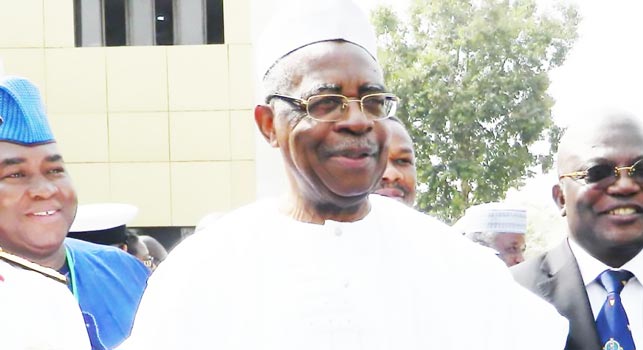 Mixed reactions have continued to trail the statement credited to a former Minister of Defence, General Theophilus Yakubu Danjuma (rtd) calling on Nigerians to defend themselves against armed bandits since the nation’s Armed Forces have failed in its responsibility of protecting lives and property.

While speaking on Saturday at the maiden convocation ceremony of Taraba State University in Jalingo, the Taraba State capital, Danjuma advised citizens to rise against what he described as ethnic cleansing that was being covered by the military.

Reacting, the Nigerian Army said it was unfortunate that Danjuma’s claim that the Army was colluding with the Fulani militia was coming at a critical time when the military was making concerted efforts in mopping up all arms in the North Central region of the country.

In a statement released on Sunday, the Minister of Defence, Mansur Dan-Ali said Danjuma’s call to arms was an invitation to anarchy which should be disregarded by all well-meaning Nigerians.

“The Nigeria Armed Forces is well organized and highly professional in discharging its constitutional mandate. Therefore, if anyone has evidence of wrongdoings or dereliction of duty against our troops, he should please bring such evidence forward through appropriate channels for necessary action.

“For avoidance of doubt, the military will not be distracted from performing its statutory duties in accordance with the rules of engagement.

“The Nigerian Army views this statement made by the former Chief of Army staff as most unfortunate at this crucial time that the military has embarked on the demilitarization of the North Central Region of the country,” the statement said.

Also reacting, the opposition Peoples Democratic Party (PDP) said General Danjuma’s statement justified the party’s stand that President Muhammadu Buhari and the All Progressives Congress (APC) be held responsible for the attacks being carried out by the Fulani herdsmen across the country.

“It is instructive to recall that former President Olusegun Obasanjo and Ibrahim Babangida, both former military leaders, army generals and patriots, had earlier raised the issue of bloodletting and pogrom in our country under the APC.

“Painfully, the APC-controlled Federal Government has not only failed in finding solution but also in contending with allegations of conspiracy and acts which are believed to have emboldened attacks against innocent Nigerians,” the PDP said in a statement.

Ben Murray-Bruce, the Senator representing Bayelsa- East Senatorial district in the National Assembly supported Danjuma’s counsel and called on President Buhari administration to heed the message and provide adequate security to all Nigerians.

In a tweet he shared on Monday, the Senator said the statement by the former Chief of Army Staff showed that Nigeria was in a bad state which calls for immediate attention.

“Can anyone accuse T.Y. Danjuma of not being a patriot? Howmany Nigerians have done for Nigeria what T.Y has done for this nation? Few, very few. When he talks like this, we should know that it has gotten to a very bad state. I call on the government to heed his call,” Murray-Bruce tweeted.

In his reaction, Ekiti State Governor, Ayodele Fayose said it was time President Buhari listened to the numerous warnings concerning the herdsmen before he is forced out of office.

“General T.Y. Danjuma just said what we have said several times. There is complicity from the highest places in this country concerning these killings by herdsmen. I hope they won’t now remember that Gen. Danjuma keeps “looted” billions of dollars in his borehole.

“I standWithDanjuma. Gen. Danjuma’s position is not different from what I have said in the past. For him to have broken his silence at this time should be enough warning to @MBuhari that it is time to go back to Daura. He should leave honourably or be disgraced out of office,” Fayose tweeted.

Also reacting, Reno Omokri, a former aide to ex-President Goodluck Jonathan also threw his weight behind Danjuma, stressing that it was simply suicidal for any Nigerian to depend on President Buhari to provide security for him.

“You still doubt that Buhari is a disaster? Watch T.Y. Danjuma’s statements. God bless General T.Y. Danjuma for telling the people of Taraba to defend themselves against killer herdsmen. You are a real man! Depending on President Buhari for protection is tantamount to suicide. Kudos sir,” Omokri tweeted.

However, elder statesman and Third Republic Presidential Adviser, Alhaji Tanko Yakasai expressed his disappointed at Danjuma’s call, saying that by virtue of the roles the General played to protect the unity of the nation, he should be the most unlikely person to make such an outburst.

According to Yakasai, rather than speak in such manner, Gen. Danjuma ought to have spoken up against the leadership of the current administration and urged them to live up to their constitutional responsibilities of ensuring the protection of lives and property.

He added that on the contrary, Danjuma could have as well encouraged his people to use their votes in a civilized manner to bring about the desired change rather than advising them to take up arms.