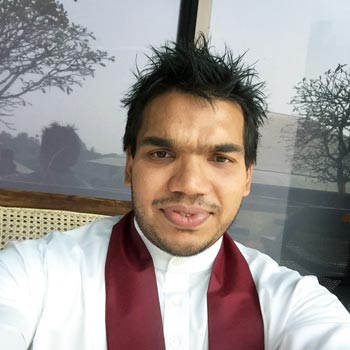 A controversial Sri Lankan opposition legislator, Namal Rajapakse says United States authorities prevented him from taking a flight to Texas from Moscow where he had gone to serve as an observer in the recently concluded Russian presidential elections.

Namal, son of former Sri Lankan president, Mahindi Rajapakse alleged that the airline, Emirates Air had been instructed not to allow him board his flight to Houston.

“I won’t make my Houston Flight as US Officials instructs them not to let me board. Sure it has nothing to do with my name, being part of the opposition or my travel from Russia,” Rajapakse said on Twitter.

The 31-year-old was invited by the Russian government to be a monitor of the presidential election which President Vladimir Putin won with a landslide.

Namad and a sibling are currently being investigated after being charged with money laundering even as other members of the Rajapakse family face various allegations of corruption.

Although the former president who was defeated in 2015 is not under any investigation, his successor, Maithripala Sirisena has said as many as half of all public procurement contracts under Rajapakse’s administration were corrupt.