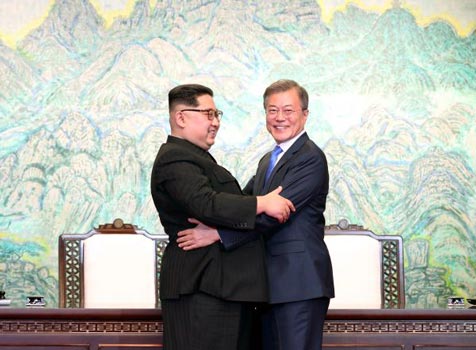 North Korean Supreme Leader, Kim Jong-Un has pledged a new era in relations with his South Korean neighbours as he, this Friday, became the first North Korean leader to set foot on South Korean soil since the end of the Korean War in 1953.

In a symbolic moment of international importance, South Korean President, Moon Jae-In shook hands with Mr. Kim on both sides of the Korean border.

In an apparently unscripted moment during a highly choreographed sequence of events,  Kim invited the South Korean leader to step briefly across the demarcation line into North Korea before the pair stepped back into South Korea-all the while holding hands.

The two leaders were met on Friday by an honour guard in traditional costume on the South Korean side of the border. The duo walked to the Peace House in Panmunjom, a military compound in the Demilitarized Zone (DMZ) between the two countries.

The duo then strolled to the end of a blue jetty where two seats, a table and glasses of water had been kept. There they engaged in heart-to-heart talks with no aides around and cameraman kept at bay, even as there were no audio recordings of what they discussed.

As they talked, sitting behind a gorgeous green scenery which had been thoroughly swept by dogs, one could see the broad, often sarcastic intermittent smiles on Kim’s face.

After the engaging talks which lasted for more than half an hour, they walked back to the Blue House where they participated in a brief ceremony consisting of the planting of a Pine tree using soil and water from both countries.

The duo shovelled soil onto the roots of the tree and then unveiled a stone plaque which had their names, official titles and a message that read: ‘Planting Peace and Prosperity’ boldly engraved on it.

Both men later held a brief press conference where they pledged to re-unite both countries and ensure a complete denuclearization of the Korean peninsula.

Although Kim did not appear to mention denuclearization in his speech, he pledged to adhere to the terms and conditions of the “Panmunjom Declaration” which called for a total denuclearization of the Korean Peninsula.

Both leaders are also expected to sign the peace treaty to formally end the Korean War later this year, 65 years after hostilities ceased.

The document, called the “Panmunjom Declaration for Peace, Propserity and Unification in the Korean Peninsula” was revealed after Friday’s meeting between both leaders.

“The two leaders solemnly declare that there will be no more war on the Korean Peninsula and a new era has begun,” the declaration said.

Fighting in the Korean War ended in a stalemate, after which an Armistice agreement was signed. But a peace treaty never followed,  thus the two sides are still believed to be technically at war.

The historic meeting between the two leaders, who seemed to have struck some kind of personal chemistry is seen as a precursor and laying of groundwork to a planned summit between Kim Jong-Un and President Donald Trump of the United States scheduled to hold sometime in May or June.