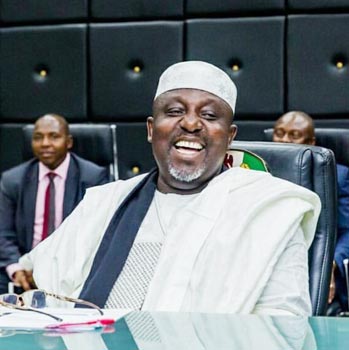 Okorocha, through a statement released by his Chief Press Secretary, Sam Onwuemeodo claimed that the APC would have been engulfed by a deeper crisis if Adams Oshiomhole had not taken over the affairs of the party.

“With certain scenarios that have played out within the fold of the All Progressives Congress, APC, at the moment and in less than one month after the National Convention of the party, it is obvious that the emergence of Comrade Adams Oshiomhole as National Chairman has saved the party from an impending catastrophe.

“With the unfolding developments in the party, the story would have been very nauseating if there was no National Convention and if Adams Oshiomhole had not emerged as the National Chairman of the party.

“It can also be argued that some of the proponents of tenure elongation were innocently doing so without having an overview of the entire disturbing picture behind the scheming for elongation of tenure.

“All these defections, as we all could see were never planned in the past few weeks. The coming of Oshiomhole just forced the cat out of the bag.

“With the events too, leaders of the party could now see the wisdom behind jettisoning the clamour for tenure elongation for the Odigie-Oyegun-led National Working Committee members and opting for a national convention to elect new officers.

“In the circumstance, those who opposed the elongation stuff and insisted on Convention should now be commended. One could easily imagine what would have been the case if the party had allowed the Odigie-Oyegun-led NWC to continue and what could have happened at the party’s primaries especially that of the presidency.

“What is happening in the party now could not have been planned and executed within these few weeks Oshiomhole took over as the National Chairman of the party. Rather his coming only altered the plan of those who wanted to destroy APC, to serve national interests,” the statement read.