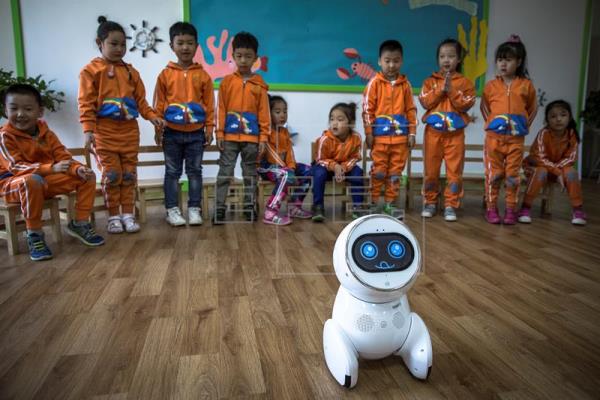 A two-foot tall robot called Keeko which bears a startling resemblance to Eve from the Pixar film ‘Wall-E’ is being used to teach young children in Chinese kindergarten schools.

Keeko moves around completely independently via inbuilt sensors and cameras. It also comes fitted with a small screen to interact with the pupils and is being used by teachers to tell stories and present logic problems to the kindergarten students.

More than 600 kindergartens across the country have been equipped with a Keeko robot and the makers of the round machine, Xiamen Technology are hoping to expand into Greater China and Southeast Asia.

The armless robot moves on tiny wheels and has inbuilt cameras that double up as navigational sensors and a front-facing camera.

“Education today is no longer a one-way street where the teacher teaches and students just learn,” said Candy Xiong, a teacher trained in early childhood education who now works with Xiamen Technology as a trainer.

“When children see Keeko with its round head and body, it looks adorable and children love it. So when they see Keeko, they almost instantly take to it,” she added.

But Xie Yi, principal of a kindergarten where Keeko has been put on trial, believes that it would be a long while before robots can completely replace humans in the classroom.

“To teach you must be able to interact, have a human touch, eye contact and facial expressions. These are the things that make an education. It’s not just the language or the content, it’s everything,” Xie argued.

She however opined that the robots which cost about 10,000 yuan ($1,500), or about the monthly salary of a kindergarten teacher in China, may have some advantages over a human educator.

“The best thing about robots? They’re more stable than humans,” she added with a laugh.

China has invested heavily in robotics and artificial intelligence in recent years, developing machines which can deliver groceries, provide companionship to the elderly and dispense legal advice.

According to the International Federation of Robots (IFR), China has the world’s top industrial robot stock, with over 340,000 units in factories across the country.

The IFR added that the service robot market, including specialized medical equipment and even automated vacuum cleaners was estimated to be worth $1.32 billion in 2017 and is expected to grow to $4.9 billion by 2022.