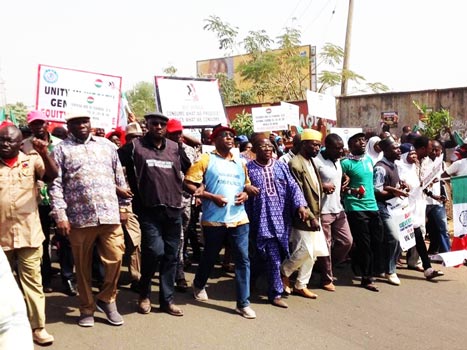 Labour unions in Nigeria comprising  the Nigeria Labour Congress (NLC), Trade Union Congress (TUC), and United Labour Congress (ULC) on Thursday mobilized their members to begin a warning strike  to press home their demand for a new minimum wage initially pegged at ₦65, 500 across board.

The NLC President, Ayuba Wabba had on Wednesday, addressed a press conference where he said the strike had become necessary because of government’s insincerity to implement the wage increase.

“These are clear signs that the government is not ready for a new national minimum wage. It has only been taking workers for a ride, it has only been taking advantage of workers’ misplaced abiding faith or trust. Given this circumstance, this warning strike is absolutely necessary. It is a precursor to the main strike which will be the mother of all strikes.”

Declaring the strike, he said: “Members of the organized labour would want to formally inform all employers of labour and Nigerians that beginning from midnight, Wednesday, September 26, 2018, workers from all sectors of the economy and our civil society allies will begin a nation-wide warning strike action over the refusal of the Federal Government to reconvene the meeting of the Tripartite National Minimum Wage Committee to enable it conclude its work.

“The labour organs further mandated the leadership to take all necessary steps including a warning strike in the first instance to compel the government to reconvene the meeting of the committee in order to bring it to a logical conclusion.

“All public and private institutions, offices, banks, schools, public and private business premises including filling stations are to remain shut till further notice. All those who mean well for this country are to see to the success of this action.

“Furthermore, this action is to remain in force until further directives are given.”

The strike is the culmination of the breakdown of talks between the Federal Government, the Tripartite Committee on the new National Minimum Wage chaired by former Minister of Housing and Urban Development, Ama Pepple and the union leaders.

The unions are also aggrieved that the tripartite meeting was suspended indefinitely by the Federal Government, even after the Minister of Labour and Employment had assured that the wage bill would take effect from September 2018.

Outcome of the meeting indicated that the organized private sector had settled for ₦25,000 while other unions had, on behalf of their members, settled for ₦43,000 as the least they could accept.

Recall that Vice President Yemi Osinbajo had last week invited some cabinet ministers and heads of revenue generating agencies to the Presidential Villa to deliberate on the feasibility of implementing the new wage bill under the current administration.