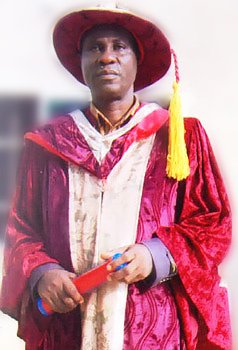 Prof. Godshield Imoh Archibong is an enigma in the world of musical entertainment. He has made a bold mark in Nigeria’s music industry and won great acknowledgement for his work in other countries, particularly, the United States of America.

Godshield Archibong is a talented musician and performing artiste who specializes in singing and composing. He has won laurels through his captivating performances . His intellectual works are very creative and refreshing.

He has been listed among the best artistes in Africa (Artistes of Excellence). He is a great artiste with live performance experiences and numerous professional festival colours. He has made salient contributions to music worldwide. He has been in music and theatrical entertainment  industry for decades gathering abundant experiences that have qualified him as an authority in the field of music.

His name was written in International Hall of Fame of Outstanding Artistes in Music and Theatrical Entertainment Industry. His name was also written in the following biographical dictionaries: Book of Records, International Biographical Dictionary Cambridge, England; History of World Performing Artistes; History of Nigerian Musicians  and, Voice of America Directory Book (Music Time in Africa 1995 Edition) and Who is Who in Nigeria 1999. He has been listed among the most distinctive artistes in the world. He has also been listed among the best artistes in Africa (Artistes of Excellence).

In 2016, he was invited to be honoured as Professor by the International Biographical Centre, Cambridge, England. He was also elected by the Board of International Biographical Centre Cambridge, England for an honorary Doctor of Letters in 2017. Only a few Africans with high academic performance have been selected by the board for this significant accolade.

In 1998, he gained admission into the University of Uyo where he read Music and graduated in 2001. From there, he veered into the world of theological education. He enrolled at New Stars Bible College, Lagos and bagged a Bachelor of Theology, a Master a Theology and a Doctorate in the same discipline.

Archibong’s musical career began in 1976 as a star singer with Sunny Risky Band of Itu between 1976 and 1977. Afterwards, he worked as Songwriter, Columbine Records Corporation, Hollywood ,California in 1981. He also worked as Professional Composer at Columbine Records.

His musical releases include “My Tower” which was a Smash Hit Album recorded for Columbine Record Corporation, California in 1981. He was the first Nigerian on the label. He also released “Right Time” on Ivory Music Label in Lagos in 1998. His latest work is a captivating album titled, “I Thank Thee.”

He has also won over a dozen other awards from different bodies and organizations in and outside Nigeria.

It is in recognition of his rare achievements in the field of Musical Entertainment that Prof. Godshield Imoh Archibong is deemed worthy to be conferred with the Development in Nigeria Merit Award which is part of the PSR National Awards 2018.