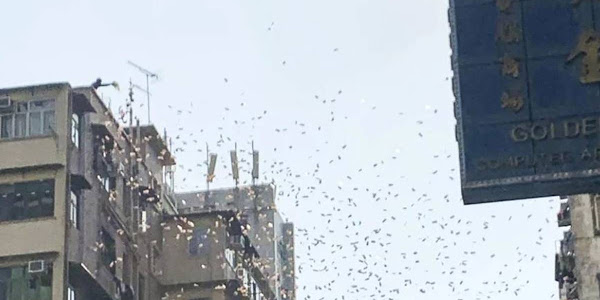 A 24-year-old man named Wong Ching Kit and popularly known as ‘Mr. Coin’ has been arrested for sparking agitations from passersby below after he tossed bank notes from the top of a skyscraper in Hong Kong.

Kit, who is the owner of Coin’s Group and Epoch Crypto-currency, a Facebook page that provides promotions for crypto- currencies and miners is said to have made a large percentage of his fortune from last year’s crypto-currency boom.

According to a report by the South China Morning Post, a Facebook Live Video captured the incident which showed the crowd rushing to catch HK$100 ($13) notes as they rained down from a building in the Fuk Wa neighborhood, one of the country’s most impoverished areas.

Kit is said to have been raising awareness for an upcoming event, choosing to take a somewhat unconventional approach to market. While he was tossing the bills, the video recorded him telling bystanders to believe that money could fall from the sky.

“Today, December 25, is FCC’s big day in announcing the trading race. I hope everyone here will pay attention to this important event. I don’t know whether any of you will believe money can fall from the sky,” he said.

Although it still remains unclear as to who- or what- he referred to as the FCC in his declaration, a Facebook video which was released shortly after the stunt showed him likening himself to the fictional movie character, Robin Hood, telling onlookers that  he was robbing the rich to give to the poor.

His charitable action triggered a mass reaction as passersby began to scamper in a bid to catch the bills that were falling from the air.

However, the police soon arrested him on charges of disorderly conduct in a public place and  have also urged members of the public who were beneficiaries of his lawlessness to return the bills they picked  them. Luk Wai-hung, a local attorney, argued that while his motives for raising advertisement were understandable, his approach was the reason why he was arrested.

Innocent bystanders at the location attested that the total amount of money that was thrown away could be millions, although the police reported that they were only able to recover HK$5,000 (the equivalent of $639) from the streets.