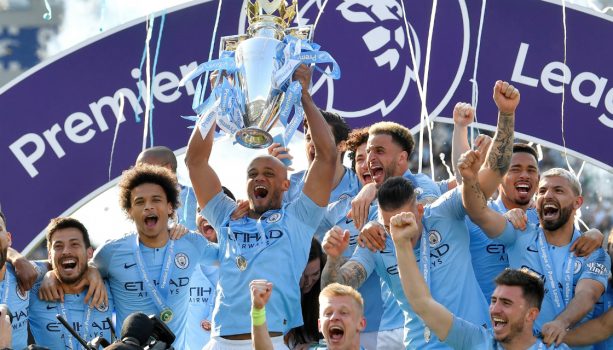 The title race between Manchester City and Liverpool went down to the wire but there were to be no final twists in what has been a thrilling and breathtaking tale of unbelievable football.

Despite going a goal down in the first half of the encounter, City retained the title after rallying round to beat Brighton 4-1 at the Amex Stadium, meaning Liverpool’s victory against Wolves was all in vain.

Sergio Aguero, Aymeric Laporte, Riyad Mahrez and Ilkay Gundogan all scored for the visitors after Glenn Murray had given the home side the lead on 25 minutes.

In a remarkable season, Man City went toe-to-toe with Liverpool as both sides refused to take their feet off the pedal in the closing stages of the season.

City’s campaign concluded on a run of 14 consecutive wins. It was against Newcastle on January 29 that the light blues last dropped points, about three-and-a-half months before lifting the title.

Liverpool’s haul of 97 points would have been enough to take top spot in every Premier League season, apart from the two seasons.

“I think it was the hardest and most satisfying. Liverpool were exceptional. There didn’t deserve to be a loser. But I’m so happy for the team. We’ve got an incredible desire,” Man City captain, Vincent Kompany told Sky Sports after the match.

Having been knocked out of the Champions League in a thrilling quarterfinal clast with Tottenham Hotspurs, the Pep Guardiola-tutored side now has the chance to win a domestic treble with FA Cup success against Watford next weekend.