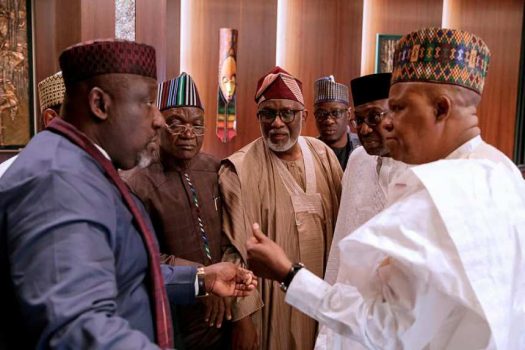 The 36 state governors in Nigeria have asked President Muhammadu Buhari to call the Nigerian Financial Intelligence Unit (NFIU) to order by stopping the moves by the agency to stop them from tampering with the monthly allocations of local governments.

According to a statement issued on Sunday by Abdulrazaque Bello-Barkindo, the Head of Media and Public Affairs of the Nigeria Governors’ Forum (NGF) Secretariat, the governors warned the NFIU not to dabble into a matter that is beyond its mandate.

The NFIU had during its inauguration, announced a ban on transactions on state and local governments joint accounts, arguing that such accounts were only transitional accounts from where funds should go directly to the accounts of local governments.

The NFIU, which was excised from the Economic and Financial Crimes Commission (EFCC) also set June 1, 2019 as the take-off date of the new order which also placed a limit on cash withdrawals from local governments accounts to a maximum of ₦500,000 per day.

Regardless of NFIU’s directives, the NGF Chairman and Governor of Zamfara State, Abdulaziz Yari Abubakar signed off a letter in which the governors expressed dismay at the attempt by the NFIU to ridicule their collective integrity and show total disregard for the Constitution of the Federal republic of Nigeria (1999) as amended.

The letter was titled: Re: NFIU Enforcement and Guidelines to Reduce Crime Vulnerabilities Created by Cash Withdrawal from Local Government Funds Throughout Nigeria Effective June 1st, 2019.

In the letter, the governors drew the attention of President Buhari to Section (6) (a) and (b) of the Constitution which ‘confers on the states and State Assemblies the powers to make provisions for statutory allocation of public revenue to the local councils in the federation and within the states respectively’.

They also noted that Section 162 (6) expressly ‘provides for the creation of the States Joint Local Government Account (SJLGA) into which shall be paid all allocations to the LGAs of the state, from the Federation Account and from the government of the state’.

The NGF Chairman said nothing in the NFIU Act, 2018 gives the body the powers that it seeks to exercise in the guidelines that it released.

They further argued that the NFIU was acting in excess of its powers and in complete disregard of the Constitution of Nigeria, accusing the Unit of stoking mischief and deliberately seeking to cause disaffection and chaos and to overheat the polity.

While stressing that local government councils were a creation of the Constitution and not financial institutions, the governors maintained that they and the local governments were not reporting entities and are therefore not under the NFIU, in the manner contemplated by the NFIU guidelines.