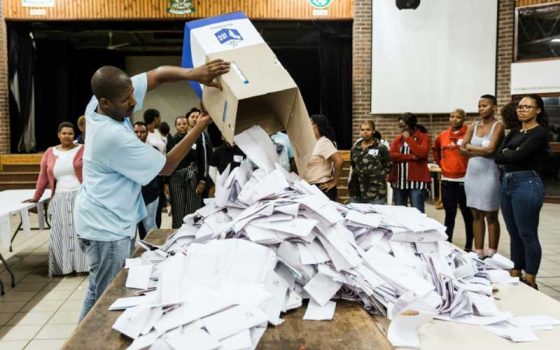 The African National Congress (ANC), the party which has been in power in South Africa since 1994 has taken an early lead in Wednesday’s parliamentary elections in the country.

According to early official results released on Thursday by the Independent Electoral Commission, the ANC has so far garnered 54.65% of the votes while the main opposition party, the Democratic Alliance (DA) is in second place with 26.49% of the votes.

Well behind in third position is the country’s third largest political force, the radical left-wing Economic Freedom Fighters (EFF) which has so far been credited with 8.07% of tallied votes.

Although the ANC saw its popularity plunge under the scandalous reign of President Jacob Zuma between 2009 and 2018, his successor, Cyril Ramaphosa has set himself the task of breathing new life into the party by pledging to fight corruption, unemployment and social disparities.