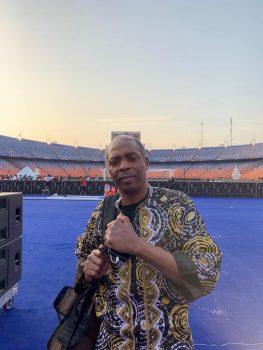 Nigerian Afrobeat superstar, Femi Kuti has been slated to perform at the opening ceremony of the 2019 African Cup of Nations (AFCON) in Egypt.

According to the organizing committee of the tournament, the four-time Grammy Award nominee will be performing alongside two other musicians from Egypt and Ivory Coast namely Hakim and Dobet Gnahore.

The announcement which confirmed that Femi Kuti will perform at the opening ceremony, was made on the official Twitter handle the Confederation of African Football (CAF), the continent’s football governing body.

Femi will perform in English while Hakim and Gnahore will perform in Arabic and French respectively. The three musicians will sing ‘Metgamaeen’ (We Are Together) produced by Synergy together on stage in Cairo, the Egyptian capital.