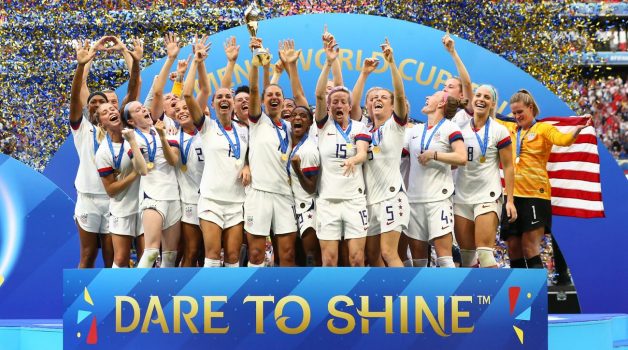 Second half goals from co-captain, Megan Rapinoe and Rose Lavelle ensured victory for the American team who produced a dominant display at the Stade de Lyon.

This is the USA’s fourth Women’s World Cup win and gives them back-to-back titles following their victory at the tournament in Canada four year s ago.

Rapinoe, one of the tournament’s standout stars converted a penalty in the final after a decision by the Video Assistant Referee (VAR) ruled that striker, Alex Morgan had been fouled inside the 18-yard box.

The goal saw her finish alongside team mate, Morgan and England’s Ellen White as the tournament’s joint top-scorer with six goals.

Rapinoe however won the Golden Boot having achieved six goals and three assists in fewer minutes than Morgan, as well as picking up the Golden Ball trophy after being voted the tournament’s best player.

The USA are also the second team to win the competition twice in a row, matching the feat of 2003 and 2007 champions, Germany.