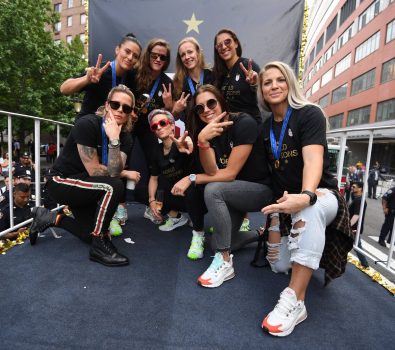 The victorious United States women’s football team were on Wednesday celebrated with a ticker-tape parade round the streets of New York.

The team which defeated the Netherlands 2-0 in last Sunday’s final of the Women’s World Cup in Lyon, France rolled up on Broadway, cheered by thousands of fans and showered in confetti.

The parade which is being televised live by several media outlets around the world will be followed by a ceremony to be held at City Hall and hosted by New York Mayor, Bill de Blasio.

Bagpipers, motorcyclists and rows of police officers joined the soccer stars, alongside Governor Andrew Cuomo who was on a separate players’ float and chanting ‘equal pay’.

The team’s players have objected that the American men’s team is paid more even though its performances are significantly weaker. A poster on one of the floats read: “Parades are cool, equal pay is cooler.”

The team captain, Megan Rapinoe had in an interview with CNN on Tuesday night said she and her teammates wanted to celebrate their title in part by talking to leaders in Congress and elsewhere about the issues they raised throughout the tournament.

She however said she was not interested in going to the White House because she did not want President Trump to ‘piggyback’ on their platform.

She stressed that the ‘equal pay’ chant from the crowd at the end of the final in France solidified the win as a transcendent moment, adding that beyond the pay, the issue was about investing equally into the men’s and women’s games.