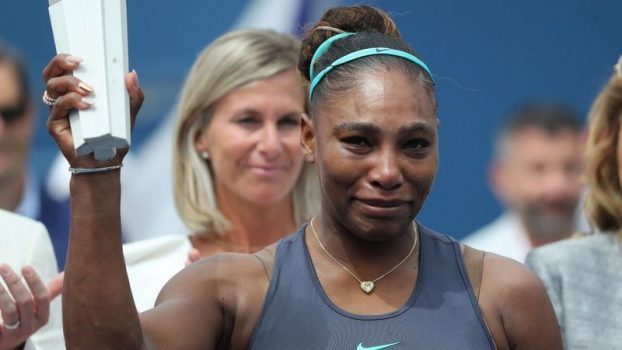 World lawn tennis legend, Serena Williams was all tears after she forced to retire from the Rogers Cup Final due to injury, handing victory to Canadian teenager, Bianca Andreescu.

The 23-time Grand Slam champion had enjoyed an impressive week, beating the likes of Naomi Osaka en route the final in Toronto.

She was meeting the hometown favourite, Andreescu for the first time but to the disappointment of the sell-out crowd, the eagerly anticipated final came to an abrupt end.

Andreescu broke early in the first set to lead 2-1 and then consolidated the break after an unforced error from Williams.

But after losing the game, Williams tried to hold back the tears as she walked to her chair and called for a trainer.

After talking to the physio, it was announced she would no longer be able to continue the game and Andreescu walked over and embraced her distraught opponent.

“I’m sorry I can’t do it today, I tried but I just couldn’t do it. Thank you, Jehovah for letting me come out here. Bianca, you’re a great sportswoman. Thanks to my team.

“It’s been a tough year, but we’ll keep going,” a tearful Williams said in the trophy ceremony.

With the victory, Andreescu becomes the first Canadian woman to win the final of the Rogers Cup since 1969.