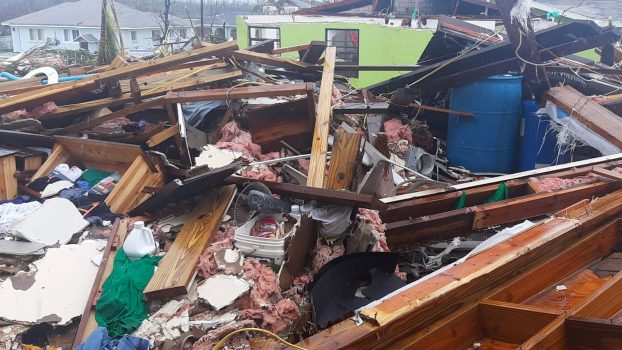 At least five people have been killed in the Bahamas as Hurricane Dorian batters the region .This is even as authorities in the country have urged people to use flotation  devices and use hammers to break out of their attics if necessary amid massive flooding.

Confirming the deaths on Monday, Bahamas Prime Minister, Hubert Minnis said that there were also people in nearby Grand Bahama Island who were in serious distress, adding that rescue crews will respond to calls for help as soon as weather conditions permitted.

“We are in the midst of a historic tragedy,” Hubert said, describing the devastation caused by the hurricane as unprecedented and extensive.

At least another 21 people have been injured in the storm, which is currently graded as a category three and which has also caused widespread power cuts.

Hurricanes are rated from category one to five based on sustained wind speed, with a category three meaning that devastating damage will occur.

By Monday night, Dorian had been hovering over Grand Bahama for almost 40 hours with maximum sustained winds of 233kph. It is expected to stay in roughly the same place until at least Tuesday morning.

Dorian unleashed massive flooding across the Bahamas, battering the islands with so much wind and water that even rescue crews were forced to seek shelter as roofs were shredded and cars were hurled into the distance.

Officials said they received a ‘tremendous’ number of calls from people in flooded homes and a radio station received more than 2,000 distress messages, including reports of a five-month-old baby stranded on a roof.

On Sunday, Dorian’s maximum sustained winds had reached 297kph, with gusts up to 354kph, equalling the record for the most powerful Atlantic hurricane ever to make landfall.

Forecasters warned that Dorian could possibly generate a storm surge as high as seven metres.

As a consequence,  flight tracking site, FlightAware reports that more than 1,300 flights have been cancelled within, to and from the US mostly due to Dorian while at least another 1,000 cancellations are expected on Tuesday.