British House Of Commons Speaker, Bercow To Step Down On October 31 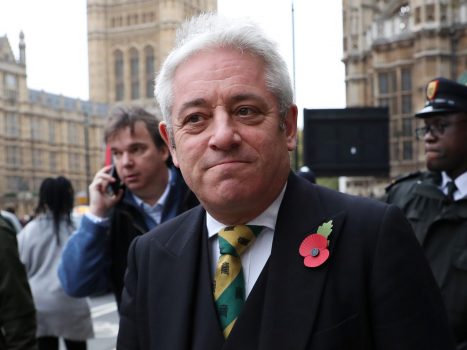 The Speaker of the British House of Commons, John Bercow on Tuesday announced that he will step down from the position before October 31.

Announcing the decision, an emotional Bercow said he had been the ‘backbenchers’ backstop’ during his 10 years on the job, adding that serving the country had been the greatest honor of his professional life.

Watched from the gallery by his wife, Sally, the Buckingham MP said he would stay in his post until Brexit day at the latest because according to him, it was the least disruptive timetable.

MPs, mostly from the opposition benches and a handful from the Tory side rose to applaud his speech as he thanked them saying: “You really are a very, very generous bunch.”

“I wish my successor the very best fortune in standing up for the rights of MPs individually and for parliament institutionally.”

Michael Gove, a long-serving cabinet minister and Chancellor of the Duchy of Lancaster paid tribute to Mr. Bercow’s commitment to his principles and constituents.

Labour Leader, Jeremy Corbyn thanked Mr. Bercow for his superb record, adding: “Our democracy is the stronger for your being the Speaker. As somebody who aspires to hold executive office, I like the idea of a powerful parliament holding the executive to account. It’s something I’ve spent the last 35 years doing myself.”

Mr. Bercow promised to only serve for nine years when he was first elected in 2009 as Speaker, a job which put him in charge of  over Commons proceedings, including picking which amendments to draft laws are voted on.

The 56-year-old Bercow was first elected as a Conservative MP in 1997 and went on to serve as shadow Chief Secretary to the Treasury and International Development Secretary.

Those tipped to replace Mr. Bercow include current Deputy Speakers, Sir Lindsay Hoyle and Eleanor Laing; Labour MPs, Harriet Harman and Chris Bryant as well as Tory MP, Sir Edward Leigh who has already confirmed that he will contest.