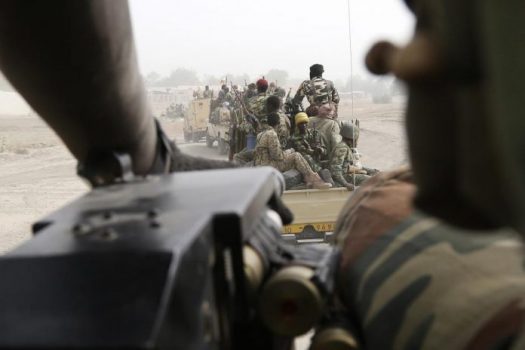 There was panic at the University of Maiduguri on Sunday night as gallant Nigerian soldiers battled to repel a Boko Haram attack on the higher institution.

Sources at the university, which is located along the Maiduguri-Bama Road said deafening sounds of gunshots were heard echoing from a direction where the female hostels of the institution are located.

The gunshots reportedly lasted for more than an hour and a half as the soldiers fought to repel the intruding Boko Haram insurgents.

The situation caused panic among students who are in the middle of their second semester examination. Many of them have indicated they would leave  the University campus over fears that it could be overrun by the militants.

“But soldiers and other security personnel protecting the school urged them to remain on the campus because no one would be allowed back to the campus should they find the need to return,” a security man with the institution who asked not to be named told journalists.

The Boko Haram sect has waged an insurgency since 2009, causing the death of thousands of people. Despite the efforts by soldiers and security operatives , the terror group has remained relentless in carrying out attacks on civilians and soldiers in Adamawa, Borno and Yobe states.