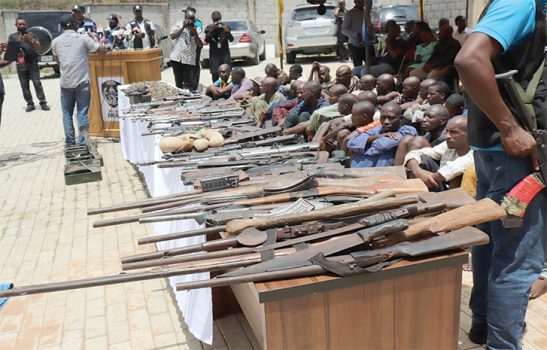 Twenty six officers of the Nigeria Security and Civil Defence Corps (NSCDC) and six military officers have been arrested for allegedly selling arms and ammunitions to kidnappers and bandits in Zamfara and Katsina states.

Narrating how the feat was achieved, a renowned armed robber hunter in Bauchi State, Ali Kwarra told newsmen in an interview that the arrests were made possible through the joint operation with the military to track down bandits as directed by President Muhammadu Buhari.

Kwarra revealed that the illegal sale of arms and ammunition was exposed by a repentant armed robber who has claimed that that some security officers were involved in the shady deal.

The hunter said he had an interaction with the repentant armed robber who gave him the full information and details on how the deal was carried out.

“I then asked him if he could link me with the officers involved and he willingly agreed to connect me with one Fulani man, who was part of the negotiations with the military and the NSCDC officers for the purchase of N300,000 worth of ammunition from the gang leader.

“On the fourth encounter, in collaboration with the military, we arrested the gang leader, who exposed five NSCDC personnel and we arrested 21 officers of the corps and six military officers,” Kwarra said.

Our Boss Was Invited To A Presidential Panel, Not Arrested–EFCC

Your Best Is Not Good Enough, Buhari Tells Service Chiefs