Chief (Lady) Tina Ovueraye: Profile Of A Woman Of Achievement 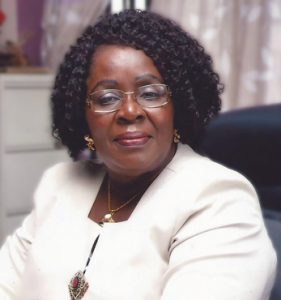 Lady Tina Ovueraye is a veritable woman of achievement. She has recorded success in virtually every sphere she finds herself. Backed by humility and a heart that is ever ready to serve humanity, she is a model to upcoming generations of women in Nigeria.

Chief (Mrs.) Tina Ovueraye hails from Agbarho in Ughelli North LGA of Delta State. She was born on December 26, over sixty years ago to the family of Chief and Mrs. Felix Gbenedio of Agbarho Kingdom.

She started her primary education at St. Mathew’s Primary School Benin City and finished up in 1964 at NBC School, Warri where she obtained her First School Leaving Certificate. In 1965, she was admitted into the prestigious Our Ladies High School, Effurun- Warri where she studied and obtained her West African Examination Council Certificate in 1969. That same year, she was admitted into the Mid- Western Technical College, (Now Auchi Polytechnic, Auchi) where she studied and obtained an OND in Secretarial Studies in 1971. She was subsequently employed by The Shell Petroleum Development Company of Nigeria as a Secretarial Staff in 1971.

She continued to work at Shell, growing in her career until the opportunity came for her family to go for a cross- posting assignment in The Netherlands. She seized the opportunity to study Childhood Education in London Montessori Teacher Training College in 1983. Her quest for learning drove her on to go to the College of Educatio,- now Ignatius Ajuru University of Education, Port Harcourt where she obtained her Nigeria Certificate in Education.

She went on to the University of Port Harcourt where she read Education Management. She had great zeal for learning such that while abroad with her husband (on his many cross posting assignments) she learnt dress making, cake making as well as flower and interior decoration. She is an industrious woman who is versatile in many fields.

Tina started her career at The Shell Petroleum Development Company of Nigeria, Warri in December 1971 as Secretary in Safety/Security Department. However, she had to leave the employment in 1978 to accompany her husband to East Malaysia on a cross posting assignment. On their return from Malaysia, she got a job at Delta Steel Company at Ovwian/Aladja as Secretary/Administrator in the Safety Department of the company. She later became a Safety Officer. This was short lived, as her husband had to move again to Holland on another cross- posting assignment in 1982.

It was at this juncture that she decided to change her career to teaching, as it would help her children and herself later in life. On their return in 1984, she taught at the Federal Government College Staff School Abuloma, for seven years and had to leave in 1991 yet again when her husband was sent on another cross posting assignment to The Hague in The Netherlands (Holland). In order to support her family, she sacrificed her careers. She had to move with the family everywhere because she considers being a wife and a mother to be her Number One career.

However, in 1998, she took a bold step of becoming a school proprietress by establishing her own school- LADYBIRD EDUCATIONAL CENTRE in Port Harcourt. The school has a Daycare, Nursery, Primary and Secondary  sections. She therefore now plays the role of a proprietress in addition to that of mother and wife.

Tina was baptized in 1966, and confirmed in 1968 as a Catholic, at the Sacred Heart Cathedral Warri. She was a very strong member of the Legion of Mary and YCS- Young Christian Society. In 1979, she joined the Charismatic Movement in the Catholic Church Malaysia. She joined the St. Anthony’s Guild in 1985 at  St. John’s Catholic Church,  Rumuokwurusi, Port Harcourt, and she is still a member.

While in Holland from 1992 to 1996, she was a religious instructor, getting children ready for baptism, First Holy Communion and Confirmation at St. Saviours Catholic Church in The Hague(Holland). She has been a marriage counsellor at St. John’s Catholic Church till date.

She is also a very strong member of the Catholic Women Organization (CWO), St. John’s  Catholic Church Rumuokwurusi. She has received several awards and honours in her diocese and parish. She was made Life Member of the Diocesan CWO in 2003. She is a patron of the Catholic Women Organisation, St. Cecilia’s Choir, Mother of Perpetual Help, St. Vincent De Paul, just to mention a few. She is also an active member of her home parish which is St. Francis Catholic Church Agbarha – Otor in Delta State.

In 1972, she met Chief ( Sir) Diamond Ovueraye when they were both working for The Shell Petroleum Development Company of Nigeria. They fell in love and got married 0n  July 29, 1972 at the Sacred Heart Cathedral Catholic Church, Warri. They are blessed with six beautiful children – one girl and five boys. She is also blessed with six beautiful and wonderful grandchildren.

She was made a traditional c.hief of Agbarha Kingdom in Agbarha- Otor along- side her husband in 2007 by the King of her husband’s community, in recognition of her meritorious services. Her traditional title is (AYESIRI OF AGBARHA KINGDOM or The Virtuous Woman of Agbarha Kingdom). ,Again in 2008, the King of Agbarho Kingdom (her own home town) also conferred her with another chieftaincy title alongside her husband. She is a very hardworking lady who never hides her talent, treasure and time wherever she finds herself.

It is in recognition of her contribution to national development in the field of Management, Development and Delivery of Quality Education that Chief (Lady) Tina Ovueraye is deemed worthy to be conferred with the Woman of Merit Gold Award.