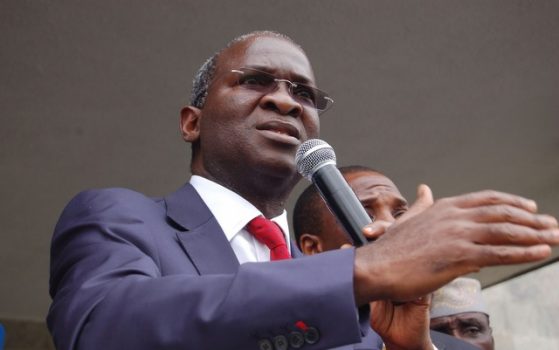 The Federal Government of Nigeria on Wednesday announced plans to reintroduce tollgates on all federal highways. The tollgates were abolished in 2003 by the administration of former President, Olusegun Obasanjo.

The country’s Minister of Works and Housing, Babatunde Fashola stated this while briefing State House correspondents on the outcome of the Federal Executive Council (FEC) meeting presided over by President Muhammadu Buhari in Abuja.

Fashola said the FEC also approved the sum of N46 billion for the repairs and rehabilitation of two roads the contracts for which were awarded by the previous administration of President Goodluck Jonathan.

His words: “The first one is Ibadan-Lagere-Ilesha Bypass  (22 kilometres) and the contract was awarded in 2010, no budgetary funding and so the rate has become obsolete.

“The contractor wants new rate and that has necessitated the revision of the rate by N3.17 billion. The old contract of N6.7 billion has moved now to N9.8 billion.

“So, the contractor is now at a point where he said those rates were unsustainable. He can’t continue and we have recommended again that the reverse rate be considered and council approved them.

On the planned return of tollgates, the Minister said: “There is no reason why we can’t toll. There was a policy of government to abolish tollgates or dismantle toll plaza but there is no law that prohibits tolling in Nigeria today.”

He said the government was also considering the introduction of electronic mode of payment at the tollgates and that more land needs to be acquired to expand the width of the tollgates to the proposed 10 lanes.