Former US President, Carter Gets 14 Stitches After Fall 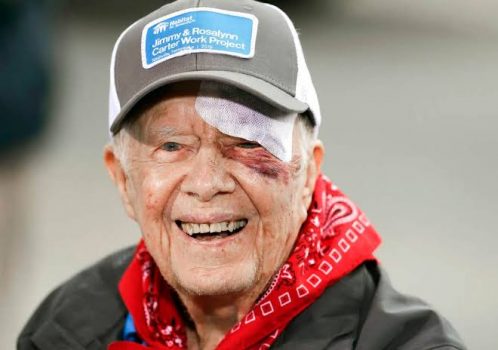 Former United States President, Jimmy Carter fell in his Plains, Georgia home on Sunday and received some stitches above his eye brow.

His spokeswoman, Deanna Congileo said in an email that the 95-year-old 39th president of the US and his 92-year-old wife, Rosalynn were scheduled to attend a Habitat for Humanity build in Nashville, Tennessee before the accident.

The opening ceremony for the project was scheduled for Sunday evening and it will run through Friday.

Undeterred by the fall, Carter travelled to Nashville later that Sunday evening where he spoke on stage at the iconic Ryman Auditorium.

He appeared at the ceremony with a black eye and a bandage after receiving 14 stitches. Despite his injuries, the Carters said volunteering was their top priority as the Nashville project marked Mr. Carter’s 36th build.

“Well, first of all, I want to explain my black eye,” Carter, who walked with a cane and held the podium as he gave brief remarks said as he kicked off the Jimmy and Rosalynn Carter Work Project with Habitat for Humanity.

“I fell down and hit my forehead on a sharp edge and had to go to the hospital. And they took 14 stitches in my forehead and my eye is black, as you’ve noticed. But I had a number one priority and that was to come to Nashville and build houses.

“We’ll be doing the best we can,” Carter said, adding that he and the former first lady will be working on the porches of each of the 21 homes built in Nashville this week so that all of the Habitat houses ‘will have something we built’.

Mr. Carter survived a dire cancer diagnosis in 2015 and surpassed George H.W. Bush as the longest-lived US president in history on Tuesday last week. He still has some trouble walking after a hip replacement in May.