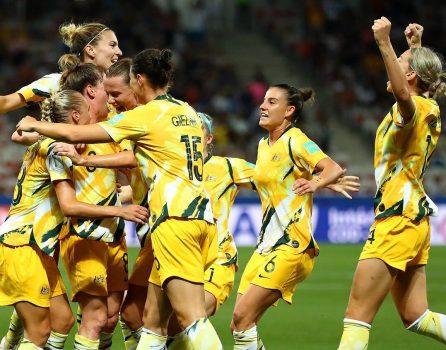 Australia’s national women’s football team have secured a new pay deal which will see them equally sharing the revenues created by the sport with the country’s male team.

The new agreement means both teams, known as the Matildas and the Socceroos will now share an equal split of commercial revenues, with the aim of closing the gender pay gap between both teams.

The four year deal will mean that female players will receive a wage which is directly tied to revenue, the same as the men’s team, with both squads getting an equal share of 24 percent of income in 2019/20 which will be raised by 1 percent each year.

The women’s team will also now be able to travel business class when going overseas – a privilege previously only afforded by the men’s team.

Part of the agreement includes a new centralized contract system which will enable the top female players earn exactly the same wage as the men’s team.

The women will also have their parental leave policy reviewed with the aim of offering higher levels of support during pregnancies and subsequent return to the team.

Australia’s Matildas will also now see a number of other improvements, including a higher level of coaching, with the team’s training now mirroring that of the men’s team and a renegotiation of sponsorship deals.

“Football is the game for everyone, and this new [deal] is another huge step toward ensuring that we live the values of equality, inclusivity and opportunity,” the Chairman of Football Federation Australia (FFA), Chris Nikou said.

“For the first time, player remuneration will be directly tied to the revenues generated by our National Teams – this will create a sustainable financial model that incentivizes players and FFA to collaborate and grow the commercial pie together.

“This is truly a unique agreement. Every national team, from the Socceroos and Matildas, down to the youth national teams as well as the Cerebral Palsy National Teams have been contemplated in this new deal,” Nikou added.

The pay gap between men and women football has been a controversial issue for many governing bodies across the world, particularly since the Women’s World Cup earlier in the year.

During the tournament, the Matildas launched a campaign calling for an end to the difference in prize money that the teams receive at their respective tournaments.