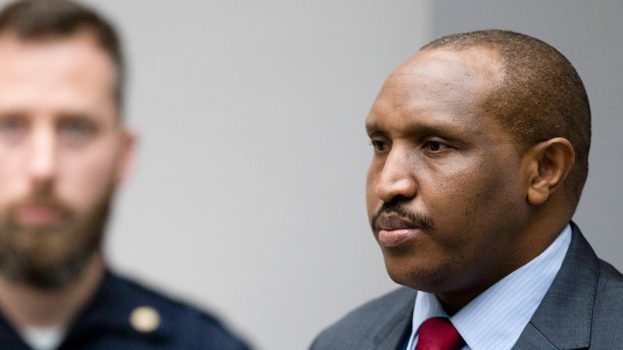 The International Criminal Court (ICC) has sentenced a Congolese warlord, Bosco ‘The Terminator’ Ntaganda to 30 years in jail after he was convicted of crimes including murder, rape and sexual slavery.

Ntaganda was found guilty in July of 18 counts of war crimes and crimes against humanity for his role as a military commander in atrocities committed during an ethnic conflict in a mineral-rich region of the Democratic Republic of Congo between 2002 and 2003.

Ntaganda showed no emotion as the Presiding Judge, Robert Fremr passed sentences ranging from eight years to 30 years for individual crimes and an overarching sentence of 30 years. The sentence was the highest ever passed by the court.

The court’s maximum sentence is 30 years although judges also have the discretion to impose a life sentence.

Ntaganda, had insisted he was  innocent but the judges held that he was guilty as a direct perpetrator or a co-perpetrator of a string of crimes including murders, rapes of men and women, a massacre in a banana field behind a building called The Paradiso and of enlisting and using child soldiers.

The court also held that the child soldiers who were used by Ntaganda as bodyguards were raped by his troops and forced into sexual slavery, leaving them with lasting physical and psychological scars.

Ntaganda testified for weeks in his own defense, saying he wanted to put the records straight about his reputation as a ruthless military leader but was unable to convince the three-judge panel of his innocence.

Ntaganda was the Deputy Chief of Staff and Commander of Operations for the rebel group, the Patriotic Forces for the Liberation of Congo. The force’s leader, Thomas Lubanga was convicted by the ICC in 2012 of using child soldiers and is currently serving a 14-year prison sentence.

Ntaganda, who has 30 days to appeal against his sentence earned more years because he was convicted of far more crimes.